Art helps Quantum 'appeal to all the senses' 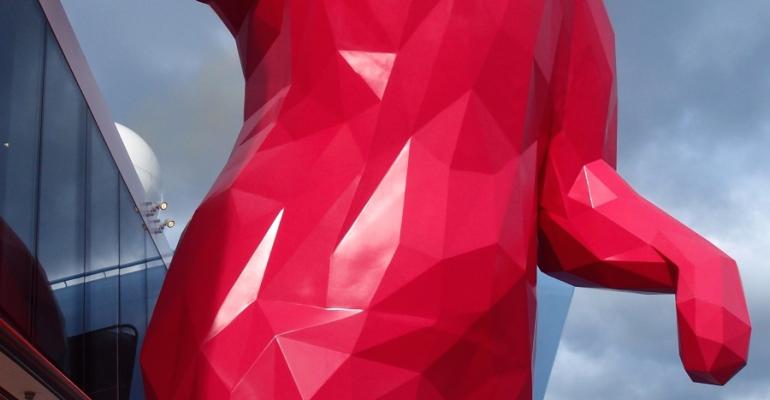 Before cruisers can have their drinks mixed by robot bartenders, soar above the ship in the North Star viewing capsule, try the sensation of sky-diving, swing on a circus trapeze or bash around in a bumper car, there is the bear.

Visible from afar as one of the ship's distinguishing characteristics, the 30-foot magenta bear atop Quantum of the Seas inspires wonder and debate. Many love it. Some don't understand why it's there.

According to Travel Weekly, as Royal Caribbean chairman Richard Fain told one puzzled travel agent during an inaugural cruise: 'The bear is a little bit ridiculous, and certainly unexpected,' then added, 'But isn’t she great?'

The bear's prominence symbolizes the importance of art on the Royal Caribbean fleet.

'Art is an integral part of the vessels. A ship has to appeal to all the senses,' Fain said. Art is also 'one of the more controversial things. Everyone has an opinion.'

It's part of nearly 3,000 artworks selected for Quantum of the Seas by International Corporate Art (ICArt). The collection explores the theme 'What Makes Life Worth Living.'

With offices in Miami, London and Oslo, ICArt has curated the art of Royal Caribbean ships for more than 20 years.

Responsible for Quantum, ICArt creative director Mariangela Capuzzo also curated the collections for Oasis of the Seas and Allure of the Seas, and for Celebrity Cruises' Solstice-class ships.

In keeping with Quantum's strong technology angle, some of the pieces are called 'smart art' because they are technology-based and interactive. 'It was a great opportunity for us to really expand and explore new media and interactive art,' Capuzzo told Seatrade Insider.

Fain singled out a 'smart art' piece—what he refers to as 'the Möbius strip'—as one of his favorites. 'Helix' is the title of the dramatic LED, metal and video installation by Spanish artist Daniel Canogar that crowns the Royal Esplanade.

It has a looping shape that echoes the twisting forms of DNA and the flowing motion of water. The piece explores crawling as a primordial movement everyone experiences as an infant, one's first opportunity to feel a sense of freedom, and a precursor to the journeys that lie ahead.

'Waves of Light' by US artist Soo Sunny Park has an opalescent shimmer and forms the centerpiece of The Via, an enclave of elegant boutiques and eateries. Thousands of iridescent acrylic plexiglass squares affixed to stainless steel grids transmit, reflect and refract light.

And then there are the elevators. Each one has a whimsical animal image—from a gorilla applying red lipstick to an owl with round glasses. They're by a young US artist, Deming Harriman. Ideal for selfies, these likely mean Quantum's lifts will be the most photographed on the high seas. 'People love the elevator pieces,' Capuzzo said.

On Quantum the art is everywhere, and sometimes it's arresting. A young man on a recent cruise said he couldn't tear himself away from an installation with blinking eyes outside the Windjammer Marketplace. 'People stand there a long time,' a crew member confirmed. An adult passenger shared pictures of a kinetic installation near the Schooner Bar on his smartphone.

Art gives personality to the ship, and it creates a narrative, Capuzzo explained. It 'takes the experience to another level' by inspiring a long-lasting visual, conceptual, emotional experience. It is the door to inviting many of our senses into the room.'

The 'What Makes Life Worth Living' theme focuses on intangible qualities like peace, love, joy, gratitude and passion. For two years Capuzzo and her team combed the world for inspiring artists, new and seasoned, whose works comprise the multimillion-dollar collection.

Capuzzo traveled to the Tel Aviv studio of Israeli artist Uri Shapira, who works with sculpture, photography, video and installation, using chemistry to grow dynamic art. 'He's a kind of mad scientist,' she quipped. Shapira grew purple glass crystals for his 'Crystal Dip' in the Vitality at Sea Spa.

Fain noted the art is carefully suited to each space. In the Solarium, for example, one of the ship's most peaceful areas with its pools, lounge chairs and greenery, there is no kinetic art. Spaniard Jaume Plensa's ethereal marble sculpture of an elongated face and softened features that diminish any references to gender, age and race is positioned at the top of cascading pools. Fain called the work and its placement 'outstanding.'

Aesthetically stunning, conceptually interesting and something people of any generation can relate to is how Capuzzo summed up the art, which she called the 'icing on the cake of an amazing ship ... a museum at sea.'