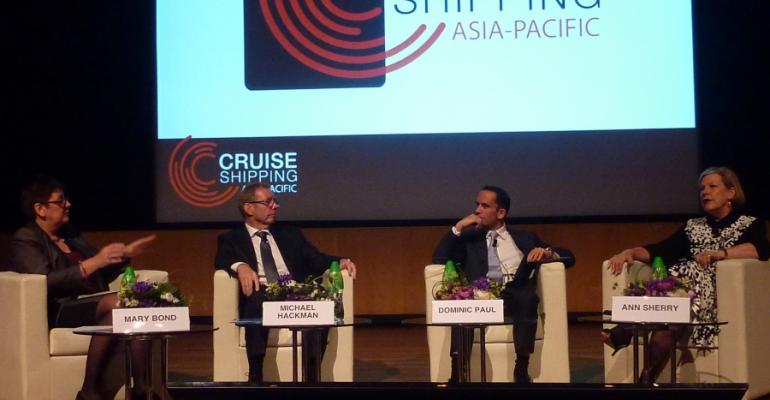 With international cruise ship deployments to Asia growing by 31% this year, the potential size of the cruise market in Asia was one of the hot topics for discussion at the Cruise Shipping Asia-Pacific Conference in Hong Kong.

According to CLIA, the number of Asians cruising this year is projected to be 1.7m, rising to 2.1m in 2015.

In giving an idea of the outlook for the Asian cruise industry, Zinan Liu, chairman of the recently formed CLIA North Asia and Royal Caribbean Cruises vp China and North Asia, said part of the problem with making forecasts is the lack of historical data for comparison since the cruise market is so new in the region.

Instead, he postulated three scenarios with accompanying projected growth figures by 2020. These took into consideration not just the demand side factors of the Asian market, but also the the supply conditions of the other major markets in North America and Europe as well as the output capacity of European yards and the newbuilding orderbook.

In the first case, a figure of 3.8m passengers by 2020 is based on an assumption that the penetration ratio in North America and Europe will continue increasing, which will in turn limit the potential to increase gains in Asia.

The second scenario, meanwhile, assumes the penetration ratio in the other two major regions will remain stagnant, which will result in 5.3m projected passengers by 2020.

And in the third and most rosy scenario for Asia, a declining penetration rate in North America and Europe will enable Asia to increase capacity as ships are moved to the region, resulting a potential increase of passenger numbers to 6.6m.

Other industry players meanwhile were even more optimistic with their forecasts. CLIA Southeast Asia chairman and Carnival Australia ceo Ann Sherry saw as many as 8m passengers by 2020, as did Genting Hong Kong evp for marine operations and shipbuilding Michael Hackman.

RCL Cruises Ltd md Dominic Paul had a slightly lower prediction of 4m to 6m within the same time frame, however qualified that by saying the cruise industry is one that continues to surprise on the upside.