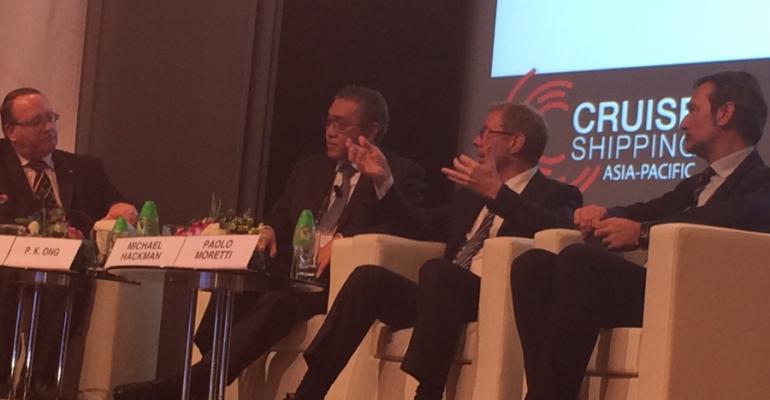 Moving forward, Asian yards will need to expand their capabilities in cruise shipbuilding, outfitting and refurbishment if the region is going to realise its potential, as current capacity worldwide won’t be able to keep up with demand, is how Stephen Payne, principal consultant for PFJ Maritime, kicked off the Shipbuilding and Refurbishment in Asia and for the Asian Market session at Cruise Shipping Asia-Pacific 2014 in Hong Kong.

‘If 10m Asian are cruising by 2020, that will require 80 large cruiseships. If only half of that number becomes the reality that is still 40 new ships,’ commented Payne. ‘As European cruiseship builders have limited slots the only way to realise the potential is to either redirect tonnage to Asian or build in Asia,’ he continued.

P.K. Ong, md Sembawang Shipyard Pte Ltd explained the Singaporean yard which has ‘favoured customer’ contracts with both Carnival and Royal Caribbean, plus close ties with Star Cruises, is repairing around eight to 12 cruise ships annually. He said there is growing demand for cruiseship repair work including drydockings and makeovers, as more tonnage heads East.

The Italian class society is involved in the Costa Atlantica refurb planned to take place in China soon The vessel will go into drydock for 15-20 days in January 2015 for the refit which includes additional superstructure, ‘which shows that Chinese yards are starting to do more on the cruiseship front,’ he commented. Moretti stressed the work RINA does is not just from a class perspective but as a partner, ‘we are not just a supplier’. On the Atlantica project, Costa undertook the drawings and plans whilst RINA is covering quality control in the shipyard.

Turning the focus onto building and designing cruiseships for the Asia market, Michael Hackman, evp cruise ops and newbuilds for Genting HK Ltd provided insight into how Star Cruises satisfies its customer base and gave a sneak preview of the some of the interiors of Genting World, the line’s first of two 150,000gt newbuilds due to be delivered in 2016 from Meyer Werft.

Returning to the Asian yards’ capabilities to build new cruiseships, Payne said, ‘they will have to step up on many fronts including design, construction and suppliers too.’

PFJ Maritime has been talking to Asian yards for over four years and he warned, there is little realisation of rules and regulations regarding cruise ship newbuilds. ‘Talk about Safe Return to Port and you are met with a glazed look,’ Payne commented. Design rules are complicated and weight and stability calculation require knowledge and are complicated to get right, he added.

He urged any Western suppliers looking to do business with Asian yards  to ensure intellectual policy rights are protected. ‘This is ‘crucial’ he stressed.

Asked by Seatrade insider if the recently announced Carnival and Fincantieri approach with China State Shipbuilding Corp is the best model for future cruiseship newbuilding in Asia,  Payne replied, ‘absolutely’.

As CSAP 2014 closed, news filtered through that an MOU for the final part of a three-way co-operation between Carnival and the two shipyards had been sealed.