Austad reflects on cruise growth, challenges at Port of Oslo 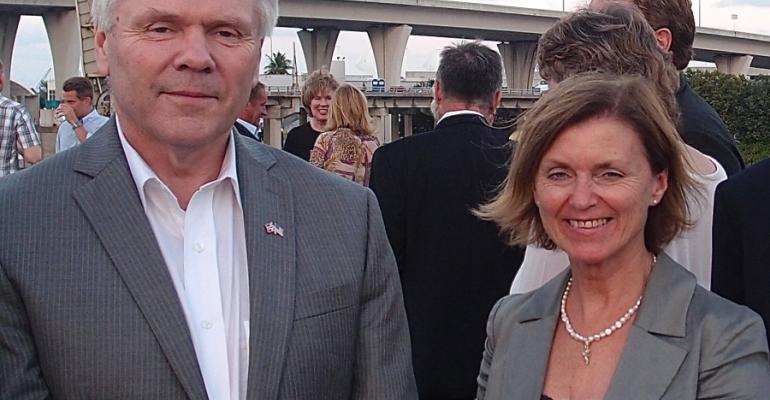 During 18 years at the Port of Oslo, Margrethe Austad has helped foster tremendous cruise growth and development. Her proudest accomplishment as cruise marketing manager has been raising awareness of the Norwegian capital; Oslo is now one of the key cruise destinations in northern Europe.

Next week Austad will accompany the port's new marketing manager, Anette Braekke, to meet with US cruise lines before stepping down in June.

Oslo's cruise calls more than tripled during Austad's tenure, and she was instrumental in developing turnaround operations, starting with Royal Caribbean in 2007. Since the port doesn't have a dedicated cruise terminal, a tent solution was chosen and a small army of people were trained to ensure things worked smoothly from the first call.

Beginning as public relations director in 1996, Austad quickly became involved in the cruise business, an area the port director wanted to pursue. She traveled to her first Seatrade (now Cruise Shipping) Miami convention in 1997 and attended every year since, along with other industry events. In 2008 her role switched to cruise marketing manager, and she has been the port's sole dedicated cruise executive.

Oslo joined Cruise Europe the year Austad started at the port. Later, she and two colleagues from Copenhagen and Stockholm formed Cruise Baltic as a European Union project; it now spans 10 countries and 28 destinations.

Oslo Cruise Network was established in 2004 with 35 companies working together to develop the capital as a good cruise destination. 'They were and they are eager to do different developments with shore excursions and are working to get costs down,' Austad said, referring to national fees.

The Port of Oslo also participates in Cruise Norway, and Austad served on the board for a period. She called it 'an important organization. Norway is a brand to market.'

Port challenges include the lack of a permanent cruise terminal, something Austad has been fighting for the past five years. The project remains under consideration.

'It would be good to have concrete plans for the cruise lines since piers and terminals are being built in the Baltic, and Oslo is holding back,' she said.

Cruise marketing has been 'a very interesting job. I enjoyed it the whole time,' Austad told Seatrade Insider, adding that she never thought of stopping before this but now wishes to pursue other interests.

'I would like to use my knowledge, but I have no specific plans,' she said.

'When I leave this position, I will miss the people, so many dear friends and dear colleagues in the cruise business. It's like a big cruise family.'