Australasians to get with the flow on FlowRider 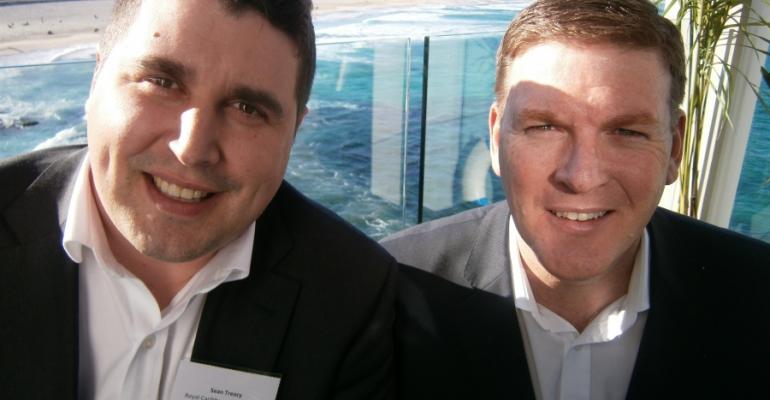 Royal Caribbean International’s regional vp Asia Pacific, Gavin Smith, hosted a cocktails and canapes reception Tuesday at Sydney’s Bondi Icebergs Club overlooking its historic ocean pool to reveal details of the A$100m month-long bow-to-stern makeover of Voyager of the Seas in Singapore this October.
Voyager will be making her third consecutive Down Under season when she arrives in Sydney from Singapore on December 8 for cruises around Australia, New Zealand and the South Pacific.
Smith said she will be sporting the region’s first FlowRider surfing simulator and introduced Adam Wildman, the 138,000gt ship’s FlowRiding Ambassador.
Wildman, from Queensland’s Gold Coast, won the European Flowboarding Championships and was fifth in the world titles in the USA.
Smith also highlighted Voyager of the Seas’ ice skating rink, its DreamWorks characters, virtual balconies, 3D movie theatre, new dining options and a converted Champagne Bar, which will be a ‘retro chic’ R Bar.
He stressed there is no charge for FlowRiding, ice skating or the DreamWorks experience.
‘These are experiences that no other cruise line in the world can replicate,’ he said.
‘We’re bringing the world’s best products and most expensive ships to Australia.
‘Make no mistake about the sincerity and the intention of Royal Caribbean in this market.’
Copyright © 2022. All rights reserved. Seatrade, a trading name of Informa Markets (UK) Limited.
TAGS: people ports & destinations cruise lines entertainment
0 comments
Hide comments
Related