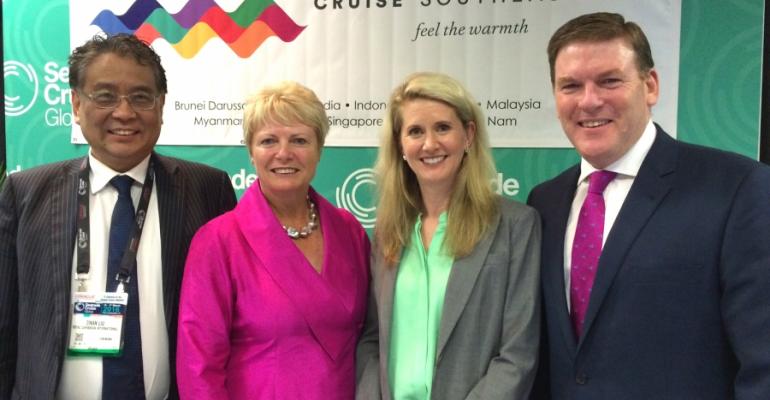 Rising disposable incomes coupled with high satisfaction levels are driving the Chinese to cruise, commented Dr Zinan Liu during a far-reaching discussion on Asia and Australasia during Seatrade Cruise Global in Fort Lauderdale.

However he warned, 'whilst Asia and China hold huge potential, do not assume it's an easy win.'

Liu said the market requires commitment which cannot be built overnight and referred to regulatory, geopolitical issues and port congestion as roadblocks that need to be removed to realise its potential.

At the start of the panel discussion, moderator Mary Bond shared some projections courtesy of Ted Blamey at CHART Management Consultants which has  been commissioned by CLIA to update the Asia Cruise Trends report first published in 2014. The new study is still being worked on but CHART predicts the total number of Asian-sourced passengers that cruised last year was 1.95m and that figure will grow to 2.85m this year representing a 46.5% increase with another 33% growth to follow in 2017.

Looking at those figures CHART is predicting 1m Chinese last year rising to 1.7m in 2016 and with the announced capacity addition through 2017 with assumed percentage take up of total by Chinese (vs other sourced pax) guests that figure could reach 2.3m in 2017, making China the world’s second largest passenger source market.

Gavin Smith, regional vp Asia Pacific Royal Caribbean Cruises ltd and chairman CLIA Australasia said the ability of the Chinese market to modernise so quickly and absorb all the new tonnage being deployed there has meant Australia and Singapore, 'are benefitting beautifully in the southern summer and equitorial winter seasons'.

Sarina Bratton, chairman Asia Pacific Ponant Yacht Cruises & Expeditions called the Asia Pacific region, 'very profitable for Ponant and a significant part of the company's overall business', She highlighted Australia, China and Japan providing enormous opportunities and is hoping that the region will benefit from the four newbuilds Ponant announced during the Seatrade Cruise Global.

Jan Swartz, president Princess Cruises said its an entrepreneurial time for cruising throughout Asia. She said,  'the challenge of building branding awareness in Asia from a very low base makes us question what we have been doing for years in the more maturer markets and what we do for the entire business.'

Liu said China is a group market vis-a-vis the FIT markets seen in US, Canada, Australia and Europe. 'The Chinese like to cruise in groups with the market dominated by wholesellers but we believe it is transiting from a group to FIT and from a wholeseller to retail market. Dr Liu  estimated the transtion will tkae around three years.

Bratton likened China t to how Japan was 15 or so years ago: 'we have found the Japanese FIT has matured considerably', she commented.

Turning attention to port development and whether it is keeping up with demand, Swartz mentioned 'some pinch-points in Korea and Japan' and that new berths would make a big difference to growth. Asked if ports were moving fast enough with infrastructure the Princess executive said, 'there is some tensions in the system at the moment but we have great partners who are helping us grow.'