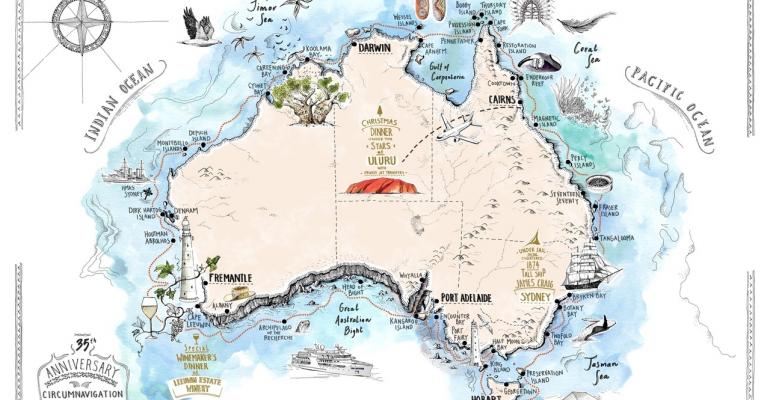 Map (click to enlarge) shows private jet flight path to Uluru for Christmas dinner under the stars
On November 7, 2020, Coral Expeditions’ new flagship, Coral Adventurer, will sail from Darwin on a 60-day round-trip circumnavigation of Australia to chalk up the company’s 35th anniversary.

The Cairns-based company was founded by Capt. Tony Briggs in 1984 as Coral Princess Cruises. In 2014, Kallang Capital Holdings of Singapore became the majority shareholder and the expedition cruise line was rebranded Coral Expeditions.

Highlights of the circumnavigation include a private winemakers’ dinner at Leeuwin Estate when Coral Adventurer docks at Cape Leeuwin and a private jet flight from Cairns to have Christmas dinner under the stars at Uluru.
There are around 70% domestic and 30% international passengers on an average cruise, with the UK and United States as the major overseas markets.
The circumnavigation goes on sale to the general public tomorrow and fares range from A$38,860 per person twin-share.
Copyright © 2022. All rights reserved. Seatrade, a trading name of Informa Markets (UK) Limited.
TAGS: ports & destinations cruise lines ships expedition
0 comments
Hide comments
Related