Australia jockeys with UK to become Seabourn's No. 2 source market 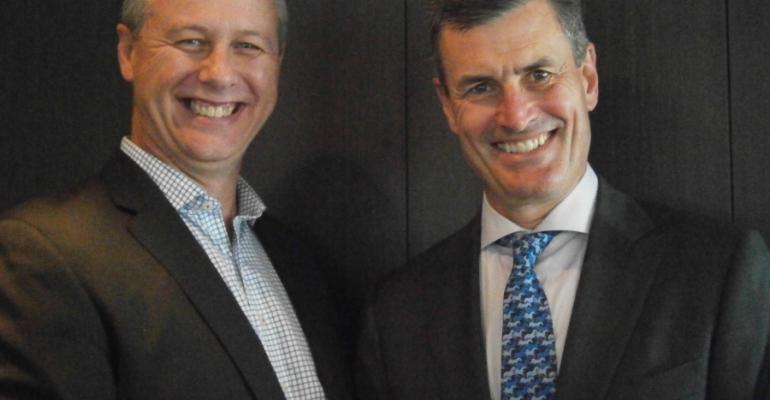 Tony Archbold (left) with Mark Kammerer at the Champagne briefing on board Seabourn Odyssey in Sydney
While Australia is currently the third largest source market for Seabourn, Tony Archbold, director of sales Australia, said it is closing the gap with the UK to become No. 2 after North America.

Archbold was speaking in Sydney Monday at a Champagne briefing for media on board Seabourn Odyssey to welcome vp international marketing and sales, Mark Kammerer.

The ultra-luxury all-suite ship which entered service in 2009 and carries just 458 passengers, visited Australia for the first time during a world cruise in 2010.

She has operated extended programmes between Australia and New Zealand since then and will return to Sydney next February on a 77-day circumnavigation of the South Pacific that leaves Los Angeles on January 4.

Archbold, who opened dedicated sales and reservations offices for Holland America Line and Seabourn at Carnival Australia’s Sydney headquarters in 2011, said Australia is jockeying with the UK to become Seabourn’s second most important market.

Seabourn Sojourn’s extensive 2015/16 Asian itineraries are particularly  attractive to Australians who have relatively short-haul flights to join the boutique ship.

Kammerer, who will be a panellist at cruise3sixty Australasia on Friday and will attend CLIA Australasia’s annual black-tie awards dinner on Saturday, gave the journalists a preview of Seabourn’s 604-passenger newbuilds, Seabourn Encore and Seabourn Ovation, to launch late 2016 and early 2018 respectively.

He said they will build on the success of the line’s Odyssey-class ships—Seabourn Odyssey, Seabourn Sojourn and Seabourn Quest.

‘With the addition of the two new ships, Seabourn will have the youngest and most modern ultra-luxury fleet in the industry,’ he said.

Archbold said that while itineraries for Seabourn Encore have yet to be announced, she 'will be coming into our region early in her life.'