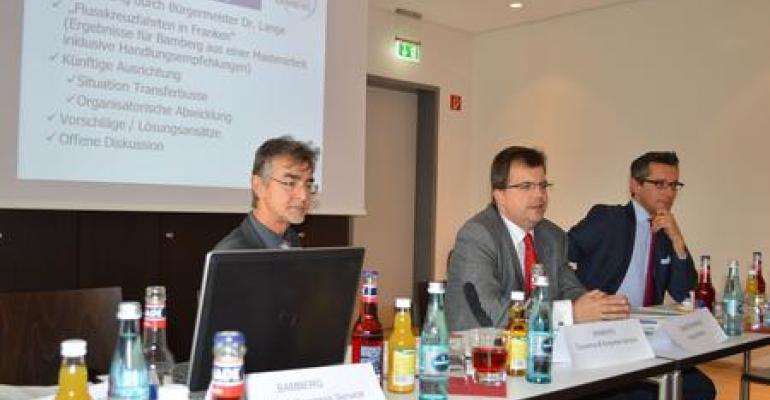 Approaches including new routes for guided tours, additional stops during these tours and a reduction in the size of guided groups were presented at a meeting in the Bavarian town.

The local tourist entity, TKS, will proceed to work on individual solutions suiting the needs of Bamberg's river cruise line clients, the townhall said in a statement issued after the meeting.

Bamberg, located at the transition between River Main and the Rhine–Main–Danube Canal, received 796 riverships last year, up 243 from 2013.

A graduate of the Chur University of Applied Sciences recently investigated the economic impact of river cruise tourism for Bamberg, as well as the response of its inhabitants to increasing cruise passenger volumes.

The city's Second Mayor, Dr Christian Lange, said the study underlined most of Bamberg's population appreciated cruise tourism. 'There is, however, also a growing minority which follows the development with some concern. We want and must consider these concerns in order to preserve the positive general attitude,' he commented.

Dr Lange said cruise tourism was especially noticeable for the citizens as tour buses were usually departing at the same time, guided groups taking the same route and groups being strikingly large. Dr Lange said the imminent task was to respond to local concerns by developing alternatives suitable to manage the rapid increase of river cruise passenger volumes.

Bamberg's Second Mayor, as well as Andreas Christel, md of TKS (Bamberg Tourism and Congress Service), suggested Bamberg's cruise line clients could in the future be supplied with an extended range of guided tours. These could start at various points in town and take different routes, helping to avoid a concentration of guests in certain areas while at the same time giving them a more individual and varied tour experience.

As a result of the meeting TKS is proceeding to work on individualized solutions in cooperation with Bamberg's cruise line clients. Additionally, the main stop for tour buses in the town centre of Bamberg will be relocated to a more suitable venue in Mussstrasse starting January 1, 2016.

The city is also anxious to exchange passenger volume management knowledge with other river cruise ports. On this point, Dr Michael Fraas – Nuremberg's Councillor for Economic Affairs and Chairman of the German Waterways and Shipping Association Rhine–Main–Danube – gave an in-sight into respective strategies applied in Nuremberg. The issue of increasing passenger volumes at hot spot ports and the respective response of the local population was an intensely debated subject at the River Cruise Industry panel at last month's Seatrade Europe in Hamburg.