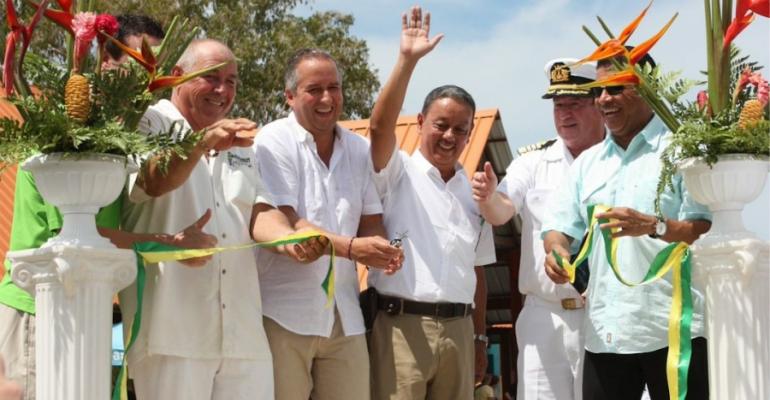 'Overall, the call went extremely well,' Jorgensen said. 'The product is a winner and the community and destination received very positive reviews from the exit interviews we conducted. The positive response was validated by Norwegian's shore excursion team asking us to add more tour capacity as soon as possible.'

A Norwegian spokeswoman told Seatrade Insider she understood the call went well but did not immediately have further information.

'We did experience a few first-call hiccups, which we expected,' Jorgensen added. 'There was some congestion, as local folks wanted to welcome the cruise passengers, and we need to work on traffic flow. As the ship departed at 5 p.m., we already had started reviewing the day and have begun to implement some changes, and we expect improvements with every call going forward.'

Jorgensen added that almost all the excursions offered were sold out, and although 900 participants were accommodated on organized tours, Norwegian anticipates high ongoing demand during its next 12 weekly calls. Banana Coast Tours offers 15 tours that include snorkeling, kayaking, waterfall explorations, horseback riding, beach breaks, nature expeditions, mangrove boat rides, jungle ATV adventures, and a variety of other cultural, historical and gastronomic excursions.

AFP news service, which said Honduras had more murders per capita in 2013 than any other country due to drug trafficking, reported the navy had deployed two patrol boats to ensure Norwegian Jewel's safety. Citing an unnamed military source, AFP also claimed some 500 military and police personnel and hundreds of undercover agents were fanned out in a 70-kilometer radius around the port area while a small plane provided aerial surveillance.

Seatrade Insider was unable to confirm this vast deployment however was told security was heightened both because of the presence government officials, who travel with their own security details and support staff, but also Trujillo has implemented ongoing security protocols and coordination among various agencies including national police, military, navy, tourism police and local police authorities. Those initiatives are permanent.

'The preventive measures taken by the security authorities and management on the day of the Norwegian Jewel's first port call at Banana Coast obviously were successful, as the call took place without any major incident,' Jorgensen said. 'Even an expensive cell phone that was misplaced and forgotten was retrieved and returned its owner on board the ship.'

A Honduran delegation including the vice president, tourism officials and the Trujillo mayor met with cruise executives last week at the Florida-Caribbean Cruise Association Conference in St. Maarten. There, Mayor Lainez told Seatrade Insider Trujillo is 'very secure' and stressed the importance of cruise tourism to the local economy.