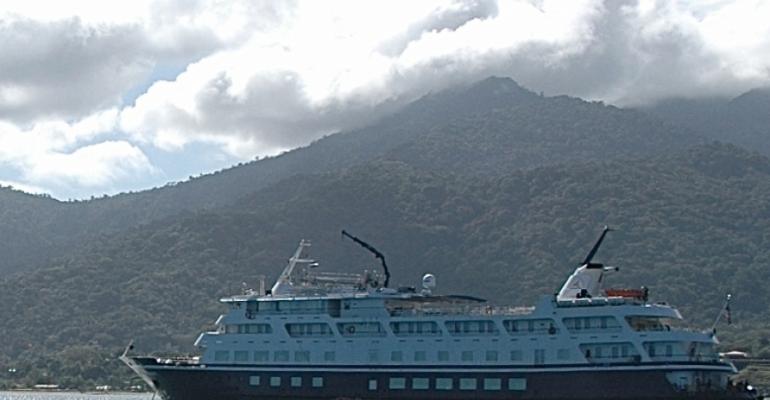 Yorktown off Trujillo, Honduras, in February

KfW IPEX-Bank confirmed the arrest and auction of the 138-passenger Yorktown, which had sailed for New York-based Travel Dynamics International until the spring.

Claiming it is owed a reported $9.85m by Explorer Maritime Cruises, controlled by Vasos Papagapitos, co-president of Travel Dynamics, KfW had the vessel seized in Florida and auctioned July 30 in Jacksonville, where it was acquired by KfW through credit bid.

'The bank does not have the intention to hold the vessel and is actively marketing the vessel,' a KfW spokeswoman told Seatrade Insider. Yorktown is available for inspection at Green Cove Springs, near Jacksonville.

TradeWinds reported KfW, a German government export credit agency, originally issued the loan to Explorer Maritime Cruises so it could order the 120-berth Orion at Cassens Werft. The ship was later swapped for Yorktown in a $10m loan deal, according to TradeWinds, citing legal filings. (The 2003-built Orion is currently sailing as National Geographic Orion.)

Travel Dynamics had acquired the 2,354gt Yorktown from General Electric Capital Corp. in autumn 2011 and deployed it on coastal voyages in the US, Canada and the Great Lakes starting the following spring.

The ship had previously sailed as Spirit of Yorktown for Cruise West. It was built as Yorktown Clipper in 1988 at First Coast Shipbuilding Co. in Green Cove Springs, and operated for Clipper Cruise Line before being acquired by Cruise West.

TradeWinds said Yorktown had been idled in March due to cash issues at Explorer Maritime Cruises.

That same month Boston-based Grand Circle Cruise Line converted its charter of Travel Dynamics' Corinthian into an acquisition. The price was undisclosed. The 98-passenger ship was built as Renaissance IV in 1990.

Those ships include the 50-passenger Artemis and Arethusa, built in 2007, for which Travel Dynamics is promoting Mediterranean cruises in July and August next year.