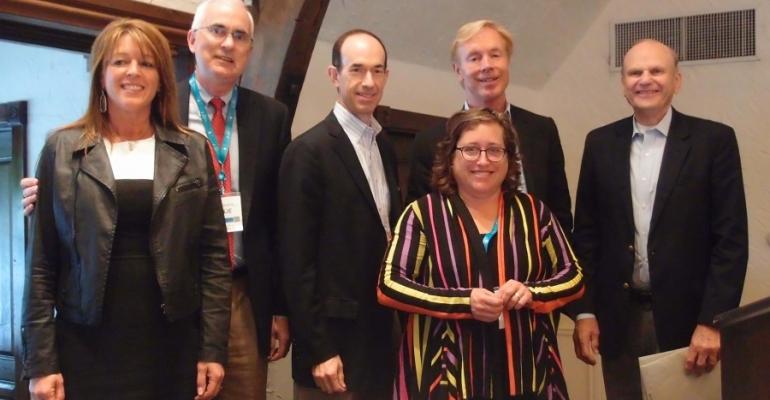 Haimark's Saint Laurent, Holland America's Maasdam and American Cruise Lines' Independence were all at Bar Harbor as the Canada/New England Cruise Symposium kicked off. This showed some key trends for the region—it's drawing new lines and doing well enough that some stalwarts come back year after year. Plus, summer calls are rising.

Still, Canada/New England wants a bigger market share than just being lumped into the 'other' category of global cruise destinations.

Maine is an important place for the industry and the region has among the most spirited—if not the most spirited—cruise alliances in the world, Goldstein said. Ports like Bar Harbor and Québec City consistently rank among passenger favorites globally.

The CLIA chairman told the several hundred symposium attendees the state of the cruise industry is good, the business is 'setting records of all kinds' and future growth looks bright. Shipyards are full of orders, for vessels big and small, giving unprecedented variety.

'And people love their cruises more than any other type of vacation,' Goldstein said.

Asia is relevant, he added, with a 'global pull for ships' that makes 'a truly global competition for business.'

'Your industry is one of the great growth industries in the world,' US Sen. Angus King of Maine told delegates. 'You have to let us know what we can do to help,' he added, whether that's greater funding for Customs and Border Protection or assistance with environmental matters.

For his part, Thierry Weissenberger, consul and senior trade commissioner for the Consulate General of Canada, discussed the availability of federal funding for infrastructure projects, including ports, and the importance of trans-border trade and cooperation.

'Your industry is so critical to our coastal economy,' added Jonathan Nass, deputy commissioner of the Maine Department of Transportation, who said legislative reforms will facilitate roads, bridges and ports. Bar Harbor, he noted, aims to develop an idle ferry terminal for cruise operations.

That's important, Goldstein said, since a ship like Anthem of the Seas may be able to tender for a limited season or two, but 'over time, it's got to have a dock.'

It's an honor to have a US senator from Maine and a Canadian consul at the symposium, Goldstein said. However, there's a third country in the regional equation: France.

'Saint Pierre and Miquelon needs to have improved infrastructure. That would help the industry,' he stressed.

The big challenge to Canada/New England remains competition from other destinations, according to Charlie Ball, evp land operations and customer service for the Holland America Group. HAL has had good success there, and the product delivers very well, he added. But ports are easily accessed by car so that makes marketing cruises tougher than some other destinations.

When it comes to marketing, there could be a lesson in Alaska, which has a simple message: the last frontier. 'It has a bucket list quality to it,' Ball said. Yet the growth rate in Alaska has slowed and on a share basis, Canada/New England is catching up.

Once a destination for retirees, Alaska has been able to rebrand successfully as an active family cruise experience, Goldstein noted. Canada/New England could do that, too.

'This is a great outdoor destination for families,' Ball agreed.

In the view of Haimark president Hans Rood, this is not the first place people cruise but an area for experienced travelers. Half of Haimark's passengers are from outside North America since the Saint Laurent is marketed in France.

Rood advised the region to 'own' brand attributes such as lobster, nature and fall foliage. 'This creates the yellow brick road to extend the season,' he said.

'We need to put Canada/New England on the map as something truly fashionable.'

American Cruise Lines has stretched its season, according to chairman Charles Robertson. Next year there will be calls in November. And with sister brand Pearl Seas Cruises, Robertson's companies carry six times as many people to Canada/New England as Alaska.

The summer months are very popular, he said, drawing 'far more people than in the fall. We market the long days of summer as a selling point.'

Ball urged ports to make themselves accessible to larger vessels and advised destinations to ensure the regulatory environment grows with the cruise business.

Serving big ships means providing a wide range of destination experiences since there are so many different types of people on board, Goldstein said. Multilingual guides are needed, too.

'Don't wait,' he advised Canada/New England. 'Seize the opportunity. Make the rest of the world react to what's happening here.'

Cruise calls are up 11% in Maine this year, Amy Powers noted. A decade ago Portland invested $30m to upgrade infrastructure and now thrives as a homeport for American Cruise Lines, Blount and Haimark and has a new international ferry, Nova Star.

'Cruise lines need to get on board with reaching out to the family market,' Powers said, adding that Maine, with a 1.3m population, is making a huge investment in a Bar Harbor cruise terminal so the state needs to count on more business than just in September and October.

'There are baby steps in some ports and huge leaps in others,' she said. 'In Bar Harbor we're taking a huge leap. Portland has already done that and it's proven very successful.'

New York is working on strengthening relationships with cruise operators and has a new joint marketing agreement with Norwegian Cruise Line, according to Elizabeth Shearin of NYCruise. Disney will return in 2016. Shore power at the Brooklyn Cruise Terminal is to become available in the fall.

'We have a great region. The brand may not be as well known as we would like, but we have 17 cruise lines,' noted Michael Vanderbeek of Cruiseport Boston, where the business is about evenly divided between homeporting ships and transit ships. The focus is on building demand and widening awareness. The growth in nonstop service from international air carriers shows Boston's appeal to far-flung markets.

Cruise Atlantic Canada is implementing a new three-year business plan, according to Brian Webb, and continues leveraging the power of partnerships to add clout to its marketing. Work with travel agents continues. Halifax has shore power, Saint John is now a turn-around port for Blount and Charlottetown is improving its port's flow and facilities.

After $156m to develop a string of smaller Saint Lawrence ports, the key turnaround ports of Québec City and Montréal are in store for major works at their cruise terminals. Québec will totally redevelop its Ross Gaudreault Cruise Terminal and create a mobile terminal at Wharf 30, noted Cruise the Saint Lawrence's René Trépanier, while Montréal will be updating its terminal and pier in projects to be completed by 2017.