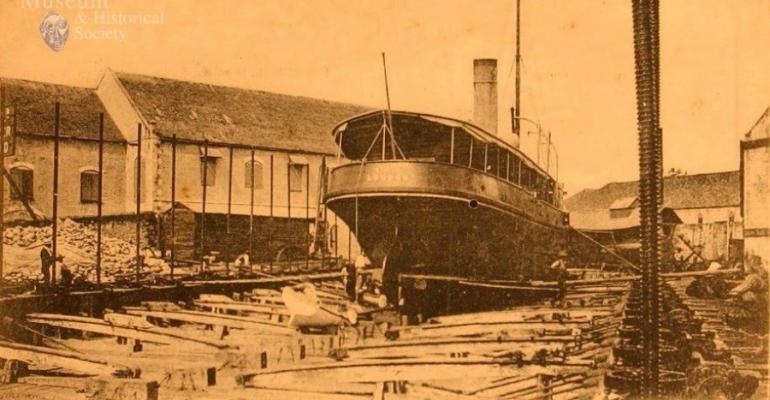 Both hinge on distinctive aspects of Barbadian culture and history, according to Martin Ince, md of Foster & Ince Cruise Services.

Dating to the late 1880s, Blackwoods Screw Dock, in the Careenage at the heart of Bridgetown, originally used steam to lift ships out of the water for hull cleaning, a much faster process than careenage, where vessels had to be emptied then pulled sideways by a rope tied to the mast to expose the bottom, first one side, then the other.

'It's the only one in the world,' Ince said. 'This revolutionized the marine industry in Barbados.' Careenage could take three weeks. With the screw dock, work could be completed in two or three days.

Among the vessels serviced at the dock, Ince said, was Potomac, President Franklin Delano Roosevelt's private yacht, which underwent extensive repairs. The facility was used until 1974.

Foster & Ince restored the area, putting in old lamp posts, brick walkways, a small maritime museum with hundreds of historic Bridgetown photographs and a bar/restaurant. The photographs include scenes like sugar being loaded on a ship, pottery at the market, a barber shaving customers on a street corner, casks of rum and Admiral Lord Nelson's statue, raised in 1813, decades before Nelson's Column in London's Trafalgar Square.

'It's a good product and we're very proud to look after it for the country,' Ince said of Blackwoods Screw Dock.

Foster & Ince's other new offering, the #1 Bajan Bus, is a refurbished 60-year-old vehicle with open sides, the kind that once frequented Bridgetown. It's painted an eye-catching red and yellow. The tour began in March and has received 'amazing reviews,' according to Ince, 'so we had to build another.'

That involved creating a mould from the original bus. The new one should be ready in the coming days.

Ince shared details about the offerings with cruise line executives during the recent Florida-Caribbean Cruise Association Conference and Trade Show in St. Maarten.