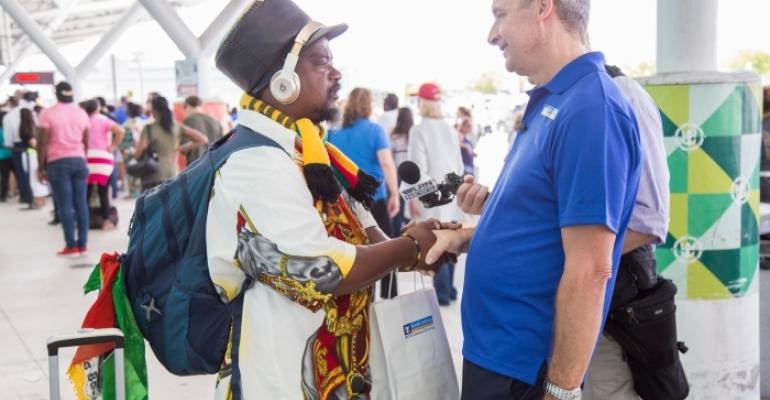 Michael Bayley, right, was on hand to greet evacuees aboard Adventure of Seas who arrived at Port Everglades Oct. 3. The ship has resumed homeport operations from San Juan
After visits to Puerto Rico and the US Virgin Islands, Royal Caribbean senior management are 'very encouraged' by the 'speed of recovery and resources,' brand president and CEO Michael Bayley said.

'It's quite amazing the recovery efforts that are in place,' Bayley told a video news conference. He added there are close to 50 Caribbean cruise destinations and five that were 'really impacted' by hurricanes.

Royal Caribbean's Adventure of the Seas already resumed homeport operations from San Juan on Oct. 7, and Carnival Cruise Line plans to do so Oct. 15. For now, though, Royal Caribbean ships are not making transit calls in Puerto Rico.

As for the US Virgin Islands, Gov. Kenneth Mapp early on stated he hoped cruise ships could return by late October.

Yesterday Tourism Commissioner Beverly Nicholson-Doty, members of the Department of Tourism, the Virgin Islands Port Authority and the West Indies Co. hosted the Royal Caribbean leaders, who spent the afternoon with representatives of the public and private sectors.

'Hopefully in the next number of days we will be making a formal announcement about the return of cruise traffic to the territory,' Mapp said, adding that a 'significant number' of requests for cruise calls to St. Croix have been received.

The governor plans to meet with the Department of Tourism and the Port Authority to develop a rational strategy to handle the visits. As he put it: 'The turnstiles cannot be opened without adequate infrastructure in place ... to ensure that visitors can have a good and safe time and a very positive experience.'