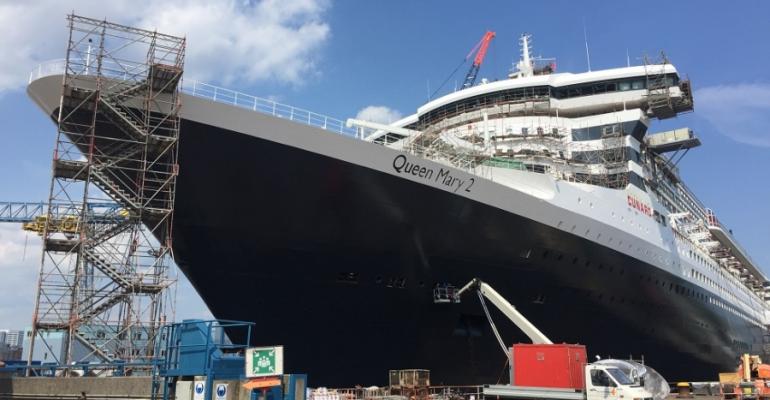 For the first time ever, Cunard allowed a group of cruise trade media from the UK, US and Germany access to Queen Mary 2 while the flagship is undergoing a multi-million-pound resmastering at Blohm+Voss in Hamburg.

The 'behind the scenes' visit took place on Tuesday, the eleventh day of an ambitious 25-day renovation program.

As journalists were shown the work in progress, as well as the results achieved so far, it became clear QM2 will sport a new air particularly in her interior public spaces when returning to service on June 21. Her overhaul after 12 years of operation is the largest refit ever undertaken by Carnival UK. The total contract value has not been disclosed.

QM2's master Captain Kevin Oprey conducted what he called, 'the Queen Mary 2 unplugged tour' and called the transformation achieved so far since the renovation started on May 27 'amazing'.

There are approximately 1,250 crew, as well as Cunard/Carnival UK representatives onboard, in addition to 1,500 yard workers and 2,500 contractor employees carrying out the project.

Despite the revamping of her public spaces, the ship's galleys are catering for both the crew and workers with up to 17,000 dishes served daily. As some of the onboard storage and refrigerated spaces are out of use, refrigerated containers have temporarily been set up on the top deck of the vessel.

A key element of the makeover is the addition of 35 new staterooms installed on Deck 13, including 30 Club Balcony Staterooms measuring 238 sq ft and five Standard Inside staterooms of 153 sq ft each.

The fitting of this additional accommodation is adding some 150 tons to the ship. The new staterooms were prefabricated in Finland and transported in eight blocks hoisted onboard; 32 cabins arrived as complete units while the remaining three had to be lifted onboard in 'flat-pack' form for completion in situ.

QM2's Queens Grill and Princess Grill suites will aslo be completely refurbed during the refit. The restyling includes the addition of subtle references to Cunard's history, including photographs taken in the company's shoreside buildings. The ship's 737 Britannia staterooms are facing a refurbishment, extending over a longer timespan through to the end of this year.

'The Verandah' is added as a new restaurant featuring French cooking with seasonal influences. On Deck 7, the former 'Winter Garden' is transformed into the new 'Carinthia Lounge': an airy venue featuring a patisserie and afternoon tea service as well as premium wine and entertainment in the evenings.

On Deck 12 aft, additional cat and dog kennels are fitted, and a new 'Kennel Suite' features in front of the kennel area to accommodate owners wanting to see and play with their pets.

The kennel area and 'Kennel Suite' will be decorated with illustrations drawn by Captain Oprey's daughter. A US fire hydrant originating from New York, as well as a street lamp from Liverpool will be fitted on Deck 12 next to the kennel zone.

The retail area is being completely restyled to accommodate new partnerships, which Cunard will disclose later this month.

Much of the public spaces – including the four passenger stairwells  and all stateroom corridors – are going to be fitted with new carpets; in total, 40,150sq mtr featuring 26 different designs have been ordered. Cunard says it is also fitting 4,000 new framed pictures as well as 6,500 pieces of new furniture.

On the technical side, QM2 is undergoing class renewal at Blohm+Voss, her four propulsion units are being rupgraded and new gas exhaust cleaning systems installed. The ship is also fitted with a ballast water treatment system and a reverse osmosis water production plant.

QM2 will leave B+V's dock on June 17. During the following four days, many finishing touches will be completed, provisions loaded and a number of technical tests carried out before QM2 sets sail from Hamburg to New York via Southampton on June 21.

In order to optimise time use during the tight schedule, Cunard's 'White Star Academy' is holding courses for service crew in B+V's adjacent buildings while the ship is docked.

Key suppliers and contractors involved in the remastering include MJM Group – which alone has over 800 employees working on the project, many involved in the refurb of 826 cabins, McCue Marine is restyling several of the public areas, Precetti Inc, Trimline as well as Ulster Carpets and Brintons Carpets.

Mastermind of the project is Carnival UK's director of hotel design and projects, Alison Clixby, working with SMC Design.