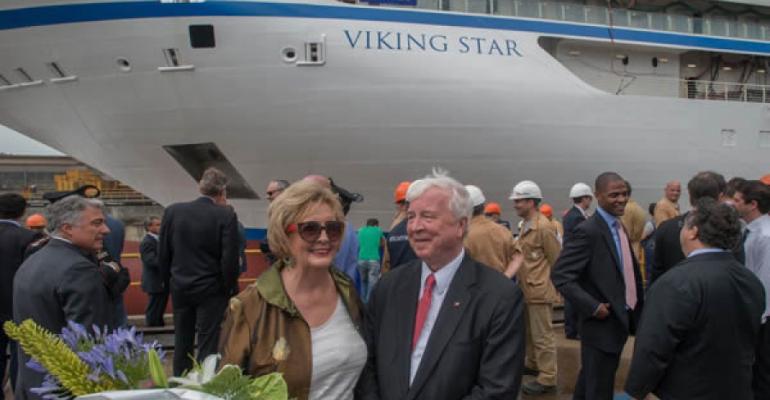 The mayor of Bergen, Norway, will serve as the godmother of Viking Ocean Cruises' first ocean-going ship. Trude Drevland will name Viking Star in her city during 2015 festivities on May 17, the country's Constitution Day.

In other news, the company released a new online video highlighting Viking Star's float-out ceremony at Fincantieri's Marghera shipyard on June 23. Drevland, who was on hand, helped weld lucky coins into the ship and cut a cord to allow water to begin flowing into the building dock.

The mayor called Viking Star 'the soul of Scandinavia, with some touches of Bergen,' adding: 'I will love it.'

Viking chairman Torstein Hagen, a native of Norway, felt it was important for the company's first ocean-going ship to have a godmother who personifies Scandinavian heritage and the Viking spirit.

'Bergen, with its colorful harbor and stunning scenery, has always been one of my favorite cities, and we are delighted for our guests to experience it firsthand starting next spring,' he said.

The city is Norway's second largest. Drevland, who was elected mayor in 2011, is known for her many civic engagements and support of the arts, having served as a member of the city council and as deputy mayor from 2007. For five years, she was general secretary of the Norwegian Band Federation, the biggest volunteer music organization in Norway, and she led business development for the Chamber of Commerce and Industry from 2002 to 2003.

Leading up to the arrival of Viking Star in Bergen, Drevland has also showcased her city in some of Viking’s other online videos, which explore the cultural treasures of the Baltic region.