Besides LNG, Costa to test fuel cell on next newbuild 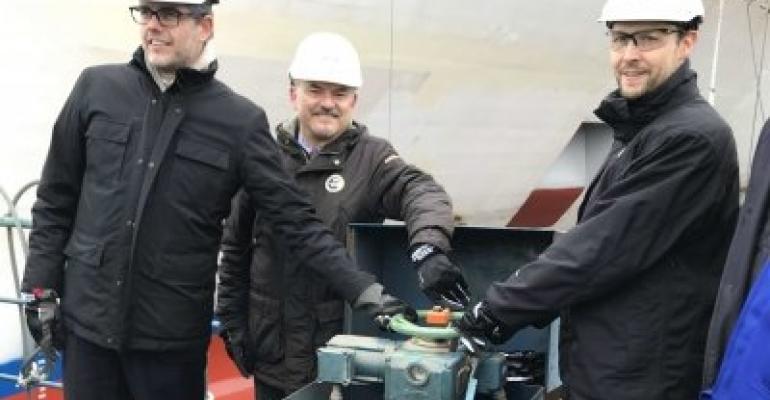 Costa's first LNG-powered ship was floated out at Meyer Turkuand has moved to the yard's outfitting dock.

'This important milestone wouldn't haven't be reached without the support of RINA classification society, which has followed, classed and supported us in the introduction of LNG on board the ships of Costa Group, making history in the cruise and shipping sector,' Palomba said. He acknowledged the strong effort and dedication of the RINA Group and its representative, Massimo Volta, senior director, marine EMEA region.

The first milestone in the plan to deliver the ship on Oct. 17 will be lighting up the propulsion system between mid-May and mid-June, according to Tom Degerman, Meyer Turku's Costa Smeralda project manager. This activity will be conducted with the dual-fuel engines, first running on marine gas oil. Later, LNG will be bunkered from a barge after the LNG fuel tanks are prepared prior to the first sea trials.

Sea trials are scheduled to start at the beginning of September, subject to change.

Meanwhile, approximately 80% of the passenger cabins and all of the crew cabins have been installed. The delivery of different areas is to commence between the last week of August and the beginning of September.

Following delivery on Oct. 17, the ship is scheduled to sail to Hamburg where the 15-day maiden cruise to Savona embarks.

After bunkering in Turku, Costa Smeralda will conduct its second LNG refueling during a Rotterdam stopover before reaching the Mediterranean. There, the ship will bunker at Carnival Corp. & plc's specially equipped Barcelona terminal, Helix. Zuccolo said refueling is planned every cruise in the Western Mediterranean.

Costa Smeralda's routine LNG operations and bunkering will benefit from the procedures, training and experience of Costa Group's AIDAnova, whose operations have gone smoothly so far.

The steel-cutting for Costa Smeralda's unnamed sister ship is planned for July 30 at Meyer Turku. Its float-out is scheduled in autumn 2020 while the hand-over will be celebrated in May 2021, Palomba said.

As part of Carnival Corp. and Costa Group's sustainability efforts, this sister ship will make another pioneering step: the installation of a fuel cell. Palomba said this would be just the first step in a road map to advance the technology and apply it to the fleet in the future, initially for hotel power needs.

The Costa Group today has 28 ships in service, totaling more than 85,000 beds. Five new vessels will be added by 2023, including two for Costa, one for Costa Asia and two for AIDA Cruises. Once this newbuilding program is completed, Costa Group's capacity will have increased by more than 50%.