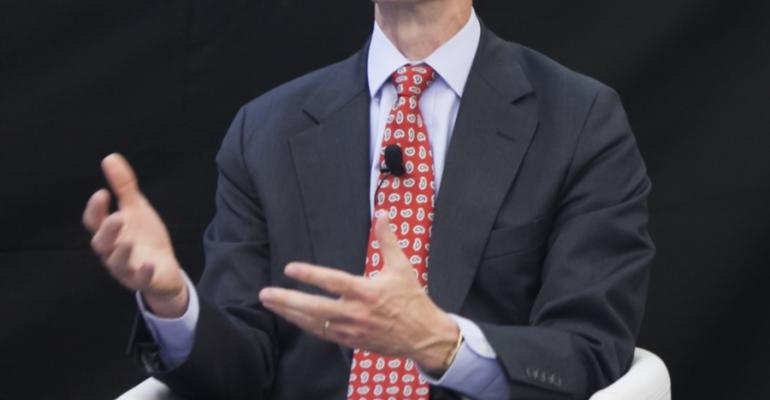 Goldstein - 'In the Mediterranean, Europe and Asia-Pacific, the largest ships can be viable and thrive'

Oasis of the Seas turning around in Barcelona this month and Quantum of the Seas going to China next year show that Europe and Asia can handle cruising's biggest and newest hardware. As Adam Goldstein, president and coo of Royal Caribbean Cruises Ltd., put it: 'In the Mediterranean, Europe and Asia-Pacific, the largest ships can be viable and thrive.'

When Oasis of the Seas made its inaugural call at Barcelona two weekends ago, it generated three times the media response of anything the company has ever done in the region, Goldstein said. Apart from the publicity, the operations were impressive—a 'great accomplishment' by the Port of Barcelona.

'It clearly shows Europe is capable right now of supporting the biggest ships in the world and the infrastructure exists to support Allure of the Seas for a full season next year,' Goldstein told Seatrade Med in Barcelona last week. 'We now have the opportunity to deploy our biggest and best new ships here. This bodes well for the Mediterranean.'

It's the culmination of a sequence of development. The current Oasis 'micro-season' paves the way for Allure's full season. Going step by step over time gives everyone the chance to acclimate.

'The infrastructure that exists to handle 6.4m passengers wasn't here 20 years ago,' Goldstein said. 'The fundamental capability to accommodate growth in the Mediterranean is available if there's adequate planning.'

From a source market perspective, Europe remains 'a mainstay of the business for us and the industry. We'd all like to see the macroeconomic situation in Europe be better than it is,' he added. However, the good news is that Spain is showing signs of recovery.

The market is growing, although at a slower rate. 'We're able to generate profitability here. It's really attractive to cruise in Europe. The business is doing well,' Goldstein told Seatrade Insider during an interview in Barcelona.

And Asia is emerging as the third major cruise operating region of the world.

After the recent deal to sell Celebrity Century to China's Ctrip.com International, it's too early to tell how the relationship will develop. 'We're in discussions to see,' Goldstein said. 'They're already a producer for us. We hope to maintain and build the relationship.'

The fact that Quantum of the Seas will operate year-round from Shanghai is 'remarkable. It's an amazing development for the Royal Caribbean International brand and the company to so quickly have one of our newest ships operating in China.

'I don't think anybody foresaw something like this,' he said, adding that just 10 years ago, China was 'a gray spot on the map' for the cruise industry.