Birthday girl Queen Mary 2 welcomed to Southampton by her sisters 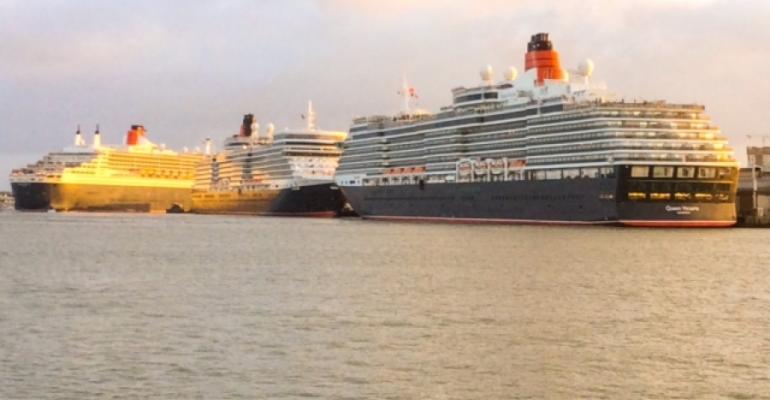 The fleet's in - Cunard's three Queens in Southampton Friday

After stealing the show during a dramatic formation sail-away off the port of Lisbon earlier this week, QM2 was once again the centre of attention as she returned to her UK base with sisters Queen Victoria and Queen Elizabeth.

The fleet staged a spectacular sunrise arrival to mark the start of a day of celebrations.

Southampton was woken by a powerful rendition of 'Happy Birthday' played on the whistles of QM2's smaller sisters as the three Queens returned to their homeport berths together for the first time this year.

A fire tug saluted the 10-year-old Cunard Queen as she edged towards her sisters positioned bow to bow for the salute to the flagship.

The arrival marked the end of QM2's four-month, 2015 world cruise, and another milestone for the world's largest cruise liner.

Celebrations, including a visit on board by HRH the Duke of Edinburgh, were scheduled to continue throughout the day. The Duke accompanied Queen Elizabeth when she named the ship in Southampton in January 2004.

The day of celebration will culminate in a further formation sail-away beneath a firework display late on Friday. Queen Mary 2 resumes her trans-Atlantic crossing duties with a 10th anniversary-themed seven-night crossing to New York where further festivities are planned.