Bold alternative to a new Venice ship channel is proposed 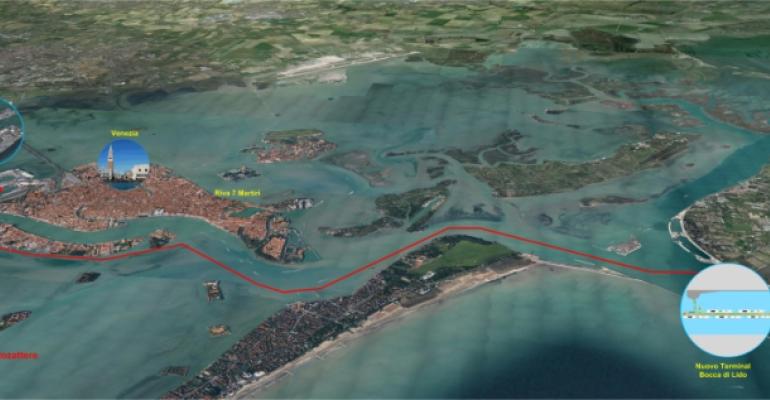 The location of the proposed new facility is at right

A bold alternative to the controversial proposed new channel for ships to reach Stazione Marittima in Venice envisions a remote satellite pier where cruise vessels would dock for passengers to transfer into the city via a large, environmentally friendly catamaran.

The 'Venis Cruise 2.0' project was officially presented to Italy's Ministry of Environment and Ministry of Cultural Heritage in Rome Tuesday.

Its proponents are Cesare De Piccoli, a former vice mayor of Venice and former deputy minister for transport under the Prodi government, together with engineer Ezio Palmisiani, president and ceo of Duferco Engineeering, an international public works company based in Genoa.

'We think this project will be a good solution,' Palmisiani told Seatrade Insider during an interview at Seatrade Med in Barcelona. 'We love Venice and we want to save Venice.'

De Piccoli and Palmisiani said their alternative solution would preserve the use of Stazioni Marittima and jobs, while also addressing environmentalists' concerns about the proposed new ship channel.

The Venis Cruise 2.0 facility, capable of handling up to five large vessels, would consist of a 940-meter long, 34-meter wide pier situated at the Bocca di Lido, on the outer side of the Mo.se floodgates. It could handle more than 24,000 passengers a day.

Designed as modules, the pier would be removable and environmentally friendly, Palmisiani said.

The estimated cost is €128m and the project would take about two years to build, its proponents said.

On the same day as the Venis Cruise 2.0 alternative was being presented in Rome, at Seatrade Med in Barcelona cruise leaders on the State of the Industry opening conference session discussed their hope for a solution to the Venice debate.

'We may be seeing the light at the end of the tunnel,' said CLIA Europe chairman Pierfrancesco Vago, executive chairman of MSC Cruises, since the Italian government in August stepped in to authorize an environmental impact evaluation of the Contorta-Sant’Angelo Channel excavation project.

The Venis Cruise 2.0 proposal was not addressed at the session.

'We fully support the need to protect destinations and sustainable solutions,' Vago said, adding that CLIA and the cruise industry are interested in working with partners, stakeholders and regulators on a solution.

'It's not easy,' he said, 'because there is a lot of emotion. We need to be pragmatic and Italians are sometimes emotional.'

'The Contorta-Sant’Angelo Channel is the most obvious solution,' added Carnival UK chairman David Dingle, vice chairman of CLIA Europe, who expressed the hope that the environmental impact study would be expedited.

'We want certainty ... (and) we want to do the right thing by all stakeholders in this debate,' he said.

For the Contorta-Sant’Angelo Channel plan, instead of reaching Stazione Marittima through the current Lido passage between the Adriatic Sea and the Venice Lagoon by transiting the Giudecca Channel past St. Mark’s Square, cruise ships would enter through the Malamocco southern passage and briefly follow the commercial ship channel to Marghera port. The proposed 4.8-kilometer Contorta-Sant’Angelo Channel would branch off from this channel to reach Stazione Marittima.

According to forecasts in August, the dredging would take approximately 18 months, putting the timetable for the whole project at around two years. €115m in funding needs to be found and permits obtained.