The Breakaway Plus quartet—two for America, two for China? 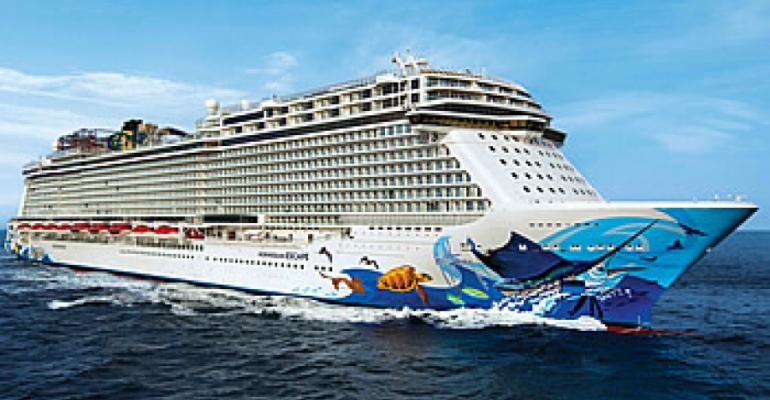 At least two ships in Norwegian Cruise Line's Breakaway Plus series will operate in North America with the 2018 newbuild to follow the recently introduced Norwegian Escape in the market. At least one but perhaps, according to a brokerage, two will sail from China.

The 2017 ship, which had been called Norwegian Bliss, will get a different name for China. That deployment will represent 8% of the company's capacity.

China may be where the 2019 newbuild is headed, too, UBS told investors in a note following a meeting with NCLH management aboard Norwegian Escape. The brokerage surmised that ship 'could be positioned for China' after NCLH learns from deploying the 2017 vessel there.

Del Rio did not address the 2019 plans in his remarks to reporters.

Norwegian Cruise Line's North American capacity will grow 13% in 2016 due to Norwegian Escape, he said. And with the 2018 newbuild, capacity growth in North America would be about 10%.

Concerning China, UBS reported NCLH management said cruises in the market today are not only pricing at a premium compared to overall company-average yields, but also are priced higher than some Alaska and Europe itineraries.

So the decision to send the 2017 newbuild to China is based on the premise that regardless of capacity growth in that market between now and then, the mix alone will drive higher yields, UBS analyst Robin Farley said. She added that NCLH management pointed out that sending a ship to China eliminates their lowest yielding itinerary, the western Caribbean.

'NCLH believes itinerary scarcity is the No. 1 driver of yields,' Farley said.