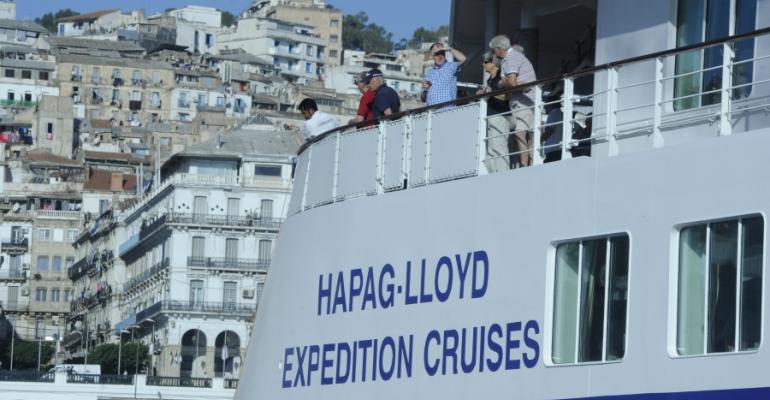 Bremen on her maiden call to Algiers

A late October visit of Bremen to Algeria was a double first for Hapag Lloyd Cruises as the expedition ship made maiden calls to the ports of Annaba and Algiers.

In Annaba, the passengers, mainly German, visited the Roman ruins of Hippo Regius whilst others chose to see the highlights of Annaba namely the Basilica of St. Augustine and the Salah Bey Mosque and adjacent Koranic School, said Bremen shore excursion manager, Frederic Schepsky.

St. Augustin was born in Algeria very close to Annaba and the Basilica built in his honour has a relic of his wrist bone.

The following day Bremen sailed into Algiers. Although small in size, guests on the Bremen had a vast selection of tours to choose from and in fact, more tours were operated for this one call with 125 passengers that for a cruise ship with over a 1,000 passengers, commented Ivan Mifsud and Mourad Larbi, joint managing directors of shorex provider Algeria Cruise Services, which has played a leading role in developing Algeria as a cruise destination.

Tours included the two UNESCO sites Tipasa and the Mausoleum of Mauretania and the Casbah of Algiers; the Botanical Gardens, Martyrs Monument, La Grande Poste, Basilica of Notre Dame D’ Afrique and Bastion 23.

ACS has handled three Hapag Lloyd cruise ships in Algeria; Europa, Europa 2 and Bremen. Europa 2 visited Algeria for the first time in May 2014.

The cruise line HQ in Hamburg commented, ‘all passengers were very satisfied with the Bremen excursions in Annaba and Algiers and had a good time there.’