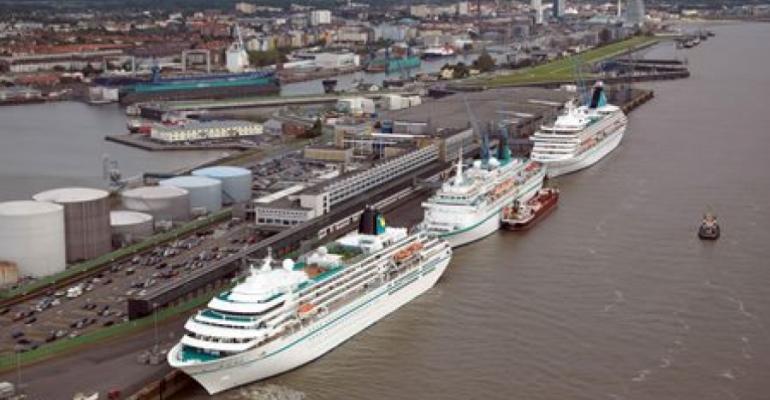 Early the morning of Sept. 10 the Phoenix Reisen trio are to berth at the Columbus Cruise Center Bremerhaven while Berlin will dock at the Seebaederkaje. At the terminal, passengers will be welcomed by stilt walkers and maritime music. At the Seebaederkaje, a musical farewell is planned for Berlin.

Approximately 6,000 passengers are expected to turn around with an estimated 12,000 pieces of luggage. The quay will also be full: around 450 tons of provisions need to be loaded on the Phoenix Reisen ships, and further a 50 tons are for Berlin.

'We are glad that we were able to convince FTI Cruises to dock at the Seebaederkaje, hence being able to offer the citizens and visitors of the maritime city a cruise ship in the middle of the city once again,' said Veit Hürdler, managing director of Columbus Cruise Center Bremerhaven.

At Seatrade Europe, officials from Columbus Cruise Center Bremerhaven and Wismar will take part in the Destination Germany booth, along with cruise ports Hamburg, Lübeck, Kiel and Rostock/Warnemünde.

On Wednesday evening Bremerhaven and Wismar will host more than 150 guests from various countries. In cooperation with Cruise Europe, the two ports will invite the guests to 'Cruise Europe—Columbus Cruise Center Night.' During a festive ceremony with live music, the 'German Cruise Awards 2016' will be presented with Wismar Mayor Thomas Beyer delivering a special Baltic Sea greeting.

On Thursday the German ports await numerous invited guests from national and international cruise companies and tour operators during a welcome reception at the Destination Germany booth.

On the last day of the exhibition, a delegation of cruise line representatives will take a sightseeing tour to Wismar with cruise terminal hosts.