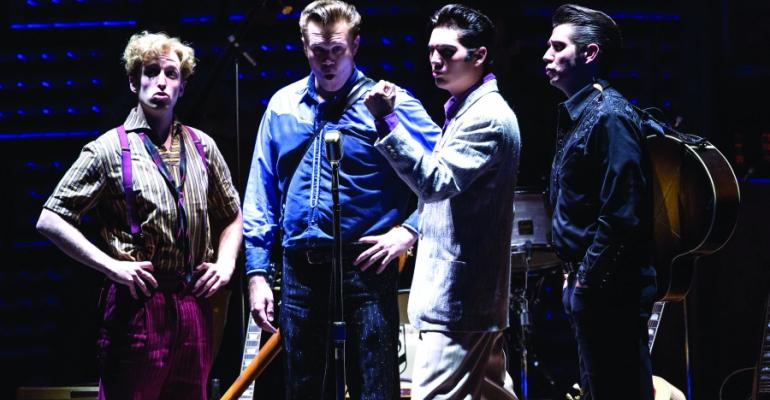 A fine dining restaurant and a tapas bar by celebrity chef José Garces, a brew pub, an upscale food emporium, a wine bar with the Michael Mondavi Family, a reimagined supper club and Tony Award-winning musicals—all are new twists aboard Norwegian Escape.

'We're transforming culinary experiences at sea. Norwegian is a pioneer in offering dining options for guests,' president and chief operating officer Drew Madsen said in announcing the branded innovations on what will be Norwegian Cruise Line's largest ship.

It was fitting that restaurant veteran Madsen's first big media appearance for Norwegian focused on dining. More than 120 reporters, broadcasters and bloggers flocked aboard Norwegian Breakaway Friday in New York for a taste and a sip of the fare that will be featured aboard Norwegian Escape when it debuts later this year in Miami.

Bayamo by José Garces will highlight Latin dishes with a heavy Cuban influence in a chic dining room and al fresco on The Waterfront. Choices will include berenjenas (roasted eggplant with tomato rice and a saffron emulsion) and bacalao carbonizado (black cod with a squid ink glaze, saffron, and tomato and chorizo rice).

Garces' Spanish tapas à la carte will be presented in a lively, casual setting at Pincho Tapas Bar. Plates will be prepared on an authentic la plancha grill at the bar in front of diners and include tortilla Española (Spanish omelet), boquerones (white anchovies with pine nuts) and jamón Ibérico (specialty ham imported from Spain).

Sugarcane Mojito Bar, a Norwegian favorite, will complete the space and serve as an entry to Bayamo.

A new concept, the Food Republic, from The Pubbelly Restaurant Group, features global cuisine for sampling and sharing. The small plates will have flavors ranging from Asia to Central Europe and the Mediterranean, all available à la carte.

Some of the hottest restaurateurs in Miami, partners José Mendin, Andreas Schreiner and Sergio Navarro have opened six concepts over the past three years and Mendin has been a semi-finalist for Best Chef South by the James Beard Foundation for three consecutive years, and nominated as People’s Best New Chef by Food & Wine magazine.

The District Brew House will be a hip, urban craft beer hall in an exclusive partnership with Wynwood Brewing Co. It will have a keg room, 24 draft beers on tap and more than 50 different bottled beers. Wynwood Brewing Co. is known for their signature La Rubia Blonde Ale, well-suited to the warm Caribbean climate. The District will also serve a new brew exclusively available on board.

Plus, Norwegian Escape will be home to the line’s first wine bar in partnership with the Michael Mondavi Family. The Cellars features an array of wine experiences, focusing on tasting, education and enjoyment, all accompanied by small plates and tapas, available à la carte. Some 35 grape varietals including top selections from Tuscany’s Ornellaia and Michael Mondavi’s own Napa Valley Estate are featured.

The ship will also house a Carlo’s Bake Shop by Buddy Valastro, star of TLC’s 'Cake Boss' and 'Next Great Baker.' On Friday Valastro called Norwegian a great partner, and described his shops going fleetwide as a 'wow.'

'They never once cut corners,' he said. 'We prepare the raw goods in our factory in New Jersey and ship them all over the world. It's gotta be like you're coming to your bakery in Hoboken.'

Entertainment had equal billing with dining at Friday's media event, with the crowd especially fired up over a performance by 'Million Dollar Quartet,' one of two Broadway musicals headlining in the Escape Theater.

'Branded entertainment has been our hallmark,' said evp sales Andy Stuar in announcing the new lineup for Norwegian Escape.

The other headline show, 'After Midnight,' combines the big band songs of Duke Ellington, a jazz band and what a critic called 'the hottest dancing on Broadway'—including tap—to bring Harlem's Cotton Club to life. The production will be presented by special arrangement with Scott Sanders Productions on Norwegian Escape.

In another new concept for the ship, the supper club has been reimagined for a dinner show, 'For The Record,' a Hollywood night that features classic soundtracks in a retrospective of John Hughes' 1980s coming of age films. The new wave sounds are from 'Sixteen Candles,' 'The Breakfast Club,' 'Weird Science,' 'Pretty In Pink' and 'Ferris Bueller's Day Off.'

Capt. Evans Hoyt, the master-designate for Norwegian Escape, called all the dining and entertainment plans 'very exciting.' He singled out 'Million Dollar Quartet' as a favorite of his on the new vessel.

'The high energy is going to be a real positive signature for the ship,' Hoyt said.