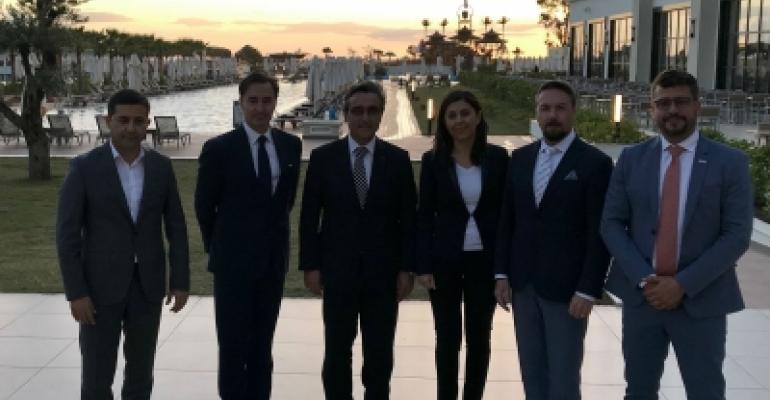 Representatives of the Turkish Government flanked by L-R: Omer Gunel, Mayor of Kusadasi and GPH's Emre Sayin on the left and Aziz Gungor and Airam Diaz Pastor on the right PHOTO: Mary Bond

Kusadasi, the gateway to Ephesus, welcomed around 100 members of MedCruise today for the start of the association's 54th General Assembly.

'From the Lydians to the Persians and from the Ionians to Alexander the Great, this city was for centuries home to ancient culttures and is holdingone of the most importnat archeological stes and reliogious references in the world such as Ephesus and the House of the Virgin Mary visited by millions of tourists each year.'

As the busiest cruise port in Turkey, Kusadasi has had a quiet three years as cruise ship calls in Turkey have reduced due to geopolitical reasons but now the port is expecting more than 200,000 passengers to pass through in 2019 and further increases are predicted for the future years, Gungor said.

A member of Global Port Holding's network, Ege Port Kusadasi is 'significant' noted GPH CEO Emre Sayin, 'both because it was out first cruise port but also because it is one fo the ports with the highest customer satisfaction scores in our network.'

Sayin said he was 'excited about the resurgence of the East Med as a cruise destination' with lines committing a return this year and in 2020: 'What is happening in the East Med is good for the whole of the Med,' Sayin remarked.

MedCruise president Airam Diaz Pastor welcomed a record 14 cruise line executives who are taking part in the next two days of the GA with B2B meetings and conference sessions as well as a special gala dinner at the Celcus Library at Ephesus Wednesday evening.

He also talked about the positive impact of cruise calls returning to the eastern part of the med to Turkey and the Black Sea and as a result, 'the Med as a whole is looking at a 22% increae in passenger movements in 2019 and a 20% predicted rise in calls.'