Brynestad in no hurry to expand SeaDream fleet 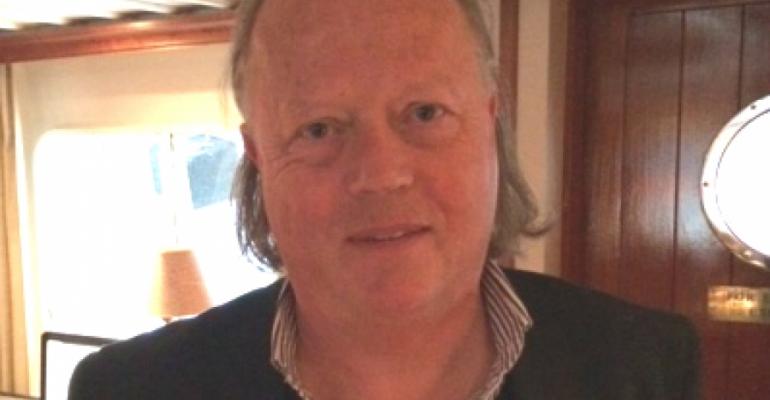 Brynestad onboard SeaDream I in London

Atle Brynestad, owner of SeaDream Yacht Club, is in no hurry to expand the fleet. ‘We are debt-free this year so in a good position to be thinking about newbuilds but it would be a nice project rather than a necessity,’ he remarked on board SeaDream I during a rare visit of the ship to London.

The entrepreneur, who late last year again assumed the role of chief executive following the departure of Pam Conover, told Seatrade Insider the two 112-passenger ships, SeaDream I and II, are operating very well, with occupancy and repeat factors ‘high’.

The UK source market is very healthy, he added, with 40% growth this year, making it the line’s second market behind the US and ahead of the Nordic countries.

A highlight of the summer programme is SeaDream operating its first ever cruise from the UK, a 14-night Baltic Capitals round-trip Dover trip, departing August 16.

‘This is the first time SeaDream I has returned to these water since her inaugural visit in 2011,’ explained Brynestad. ‘Back by popular demand from past guests the ship will operate five sailings in the Baltic followed by three to the Norwegian fjords – an itinerary that the Norwegian owner is particularly proud to see. ‘I love taking the ship back to my home,’ he said.

After, SeaDream I heads south for Lisbon, then Rome and on to Athens to join SeaDream II in the Mediterranean through to the end of the summer.

Last night the vessel left her mooring alongside HMS Belfast in the shadow of Tower Bridge headed for Bremerhaven in Germany for a scheduled drydock before starting her Northern Europe season.

During a 17-day drydock, SeaDream I will undergo a $4m to $5m makeover including hull cleaning and repainting, galley upgrades, air conditioning overhauls, new carpets, fabrics and furnishings in some of the public areas, plus all suites will get flat screen TVs. The work is similar to that done on SeaDream II in Singapore last November, Brynestad said.

He is quick to point out that both vessels (built in 1984 and 1985 as Sea Goddess I and II) are in excellent condition, both mechanically and front of house: ‘By spending several million dollars each year in keeping them in good operating condition, these ships are newer today than they were 14 years ago.’ Another reason why a newbuild in not so essential, he said.

So what is SeaDream doing to reinvent the product this summer? Brynestad pointed to four wine-themed voyages, including a special wine education repositioning cruise, plus the culinary offering, which includes a full raw cuisine menu and a new Scandinavian menu for Northern Europe that features reindeer, moose and locally caught fish.

The wine voyages pair legendary vineyards with expert instructors and winemakers. The voyages will provide experiences for beginners and oenophiles with itineraries including vineyard visits, tastings, wine master classes and a special dinner.

The wine education voyage on SeaDream II’s 12-day crossing from Lisbon to San Juan in late October is fully booked.