A bubbly beginning for Regent newbuild at Fincantieri's Sestri Ponente 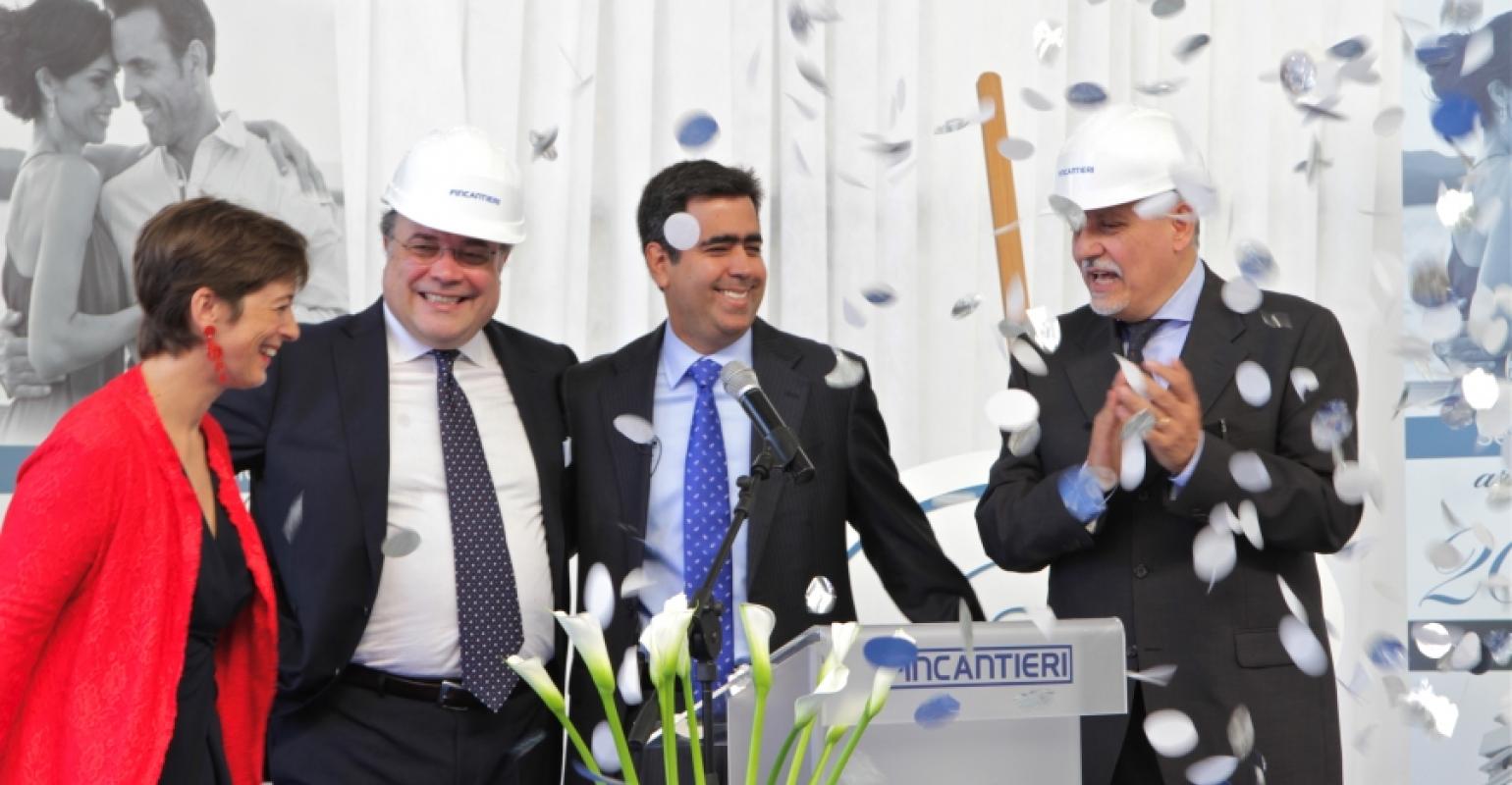 RSSC's Kunal Kamlani, center, heralds steel-cutting with, from left, Maison Krug master sommelier Michela Cimatoribus, Fincantieri's Gabriele Cocco and, at right, Sestri Ponente's Raffaele Davassi
The pop of a cork from a Krug Grande Cuvée magnum signaled the start of steel-cutting for Seven Seas Explorer at Fincantieri's Sestri Ponente on Tuesday. The Regent Seven Seas Cruises newbuild's keel-laying is planned for January, with float-out in the last quarter of 2015 and delivery scheduled in summer 2016.

‘This ship will set a new benchmark for luxury service on board any vessel at sea today,' asserted Kunal Kamlani, president of Regent Seven Seas, who attended the ceremony with Fincantieri’s Gabriele Cocco, svp merchant vessels, and Raffael Davassi, Sestri Ponente’s manager, among others.

The addition of Seven Seas Explorer will grow Regent's capacity almost 40%, from 1,890 berths to 2,640 berths.

‘With this 54,000gt ship able to carry around 750 guests, we will create a level of personalized service that the industry has never seen before,’ Kamlani told Seatrade Insider.

He referred to Fincantieri’s newbuild partnership with sister company Oceania Cruises in delivering Riviera and Marina, in 2011 and 2012, respectively.

Regent has invested more than €100m to retrofit its fleet in the last couple of years ‘to further elevate the all-inclusive experience we are providing our guests,’ Kamlani said.

Seven Seas Voyager at the end of 2013, followed by Seven Seas Mariner a couple of months ago, have both undergone major makeovers and Seven Seas Navigator's is planned at the beginning of 2015.

‘When the new flagship is delivered in summer 2016, it will incorporate many new features which will be progressively rolled out across the rest of the fleet,’ Kamlani said.

Seven Seas Explorer’s itineraries will be unveiled toward the end of 2014, with bookings to open in January.

Kamlani said the interiors, by Tillberg Design of Sweden, RTKL Associates and I-Crave, are to be finalized. ‘We will start reviewing the unique design elements from the beginning of 2015, including luxury fabrics and materials that have never been used before in cruise shipbuilding,’ he added.

With one of the highest space ratios and crew-to-passenger ratios at sea, the 223.8-meter Seven Seas Explorer will feature 369 suites ranging from 300 square feet to over 2,000 square feet for the owner’s suite, six open-seating gourmet restaurants, a nine-deck atrium, two-story Explorer Theatre, three boutiques and an expansive Canyon Ranch SpaClub.

The ship will be diesel-electric-powered with a maximum speed of 20 knots.

During Tuesday's ceremony, Kamlani and Cocco began a countdown that culminated with Maison Krug Italy’s master sommelier, Michela Cimatoribus, releasing the cork from a magnum of Krug Grande Cuvée. As the cork popped and the Champagne flowed, confetti cascaded and a laser cut the first piece of steel for the ship.

In a statement, Fincantieri ceo Giuseppe Bono expressed the shipbuilder's delight in having Regent Seven Seas as a new client, and a newbuild that he said will become 'the definition of excellence.'