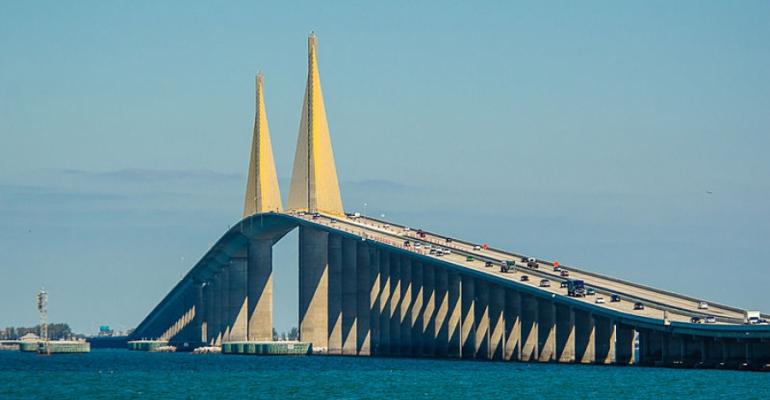 There will be a significant loss of cruise traffic and economic impact in future years if Tampa does nothing to address the 180-foot air draft limitation imposed by the Sunshine Skyway Bridge, a new state study confirmed. Building a port seaward of the bridge, which could cost up to $647m, or building a new bridge and demolishing the current one at about $2bn, are potential alternatives.

However, more analysis is needed, according to the 'pre-feasibility' report by the Florida Department of Transportation.

The study asserted that, without constraints, the market potential for the Tampa Bay region in the long term could exceed 2.5m passengers, resulting in an estimated annual economic impact of close to $1bn and up to 5,000 cruise-related jobs as the industry continues to grow and the average ship size continues to increase.

Yet over the next 10 to 15 years, the Sunshine Skyway Bridge will impede cruise growth, and lines are already deploying smaller, older ships to the port because of the height restriction. The FDOT study projected a loss of 33m to 35m cruise passengers through 2043, and said that other Florida ports would not likely absorb these customers because Tampa serves as a gateway to western Caribbean cruises, primarily for a drive market that otherwise likely would go to Mobile or New Orleans to embark ships.

When assessing the possibility of building a new port seaward of the bridge, FDOT considered a four-berth homeport facility with terminals of at least 100,000 square feet and parking for at least 9,000 cars plus room to expand. A preliminary cost estimate for a site of approximately 50 acres in land and berth area was $632m to $647m. Environmental issues would need further consideration.

The cost of building a new bridge and then demolishing the existing one was estimated at $2bn, with the construction taking four years and the demolition two more.

Alternatively, raising a section of the bridge to 240 feet would entail a three-year construction period with the bridge closed for up to two years. The cost was estimated at $1.5bn but the operation has a 'very high risk of instability' during the cutting and lifting phase. Raising a section of the bridge by demolishing and replacing it would provide lesser risk but a longer construction time, about three years, the FDOT report said.

Environmental issues related to any bridge work need further study, the costs and risks of a bridge alternative are high, and traffic impacts would be extensive. The impact on marine traffic would have to be analyzed, too, FDOT cautioned.

Moreover, if a bridge plan were selected, the existing Tampa cruise berths would have to be upgraded to support larger ships. The current ship length limit is 965 feet.

FDOT did not recommend one option over another but said that is for the Tampa Bay community to decide.

The study highlights options to be considered for how the region can maintain its current cruise business while at the same time allow for significant growth from the mega-ship market, and to identify potential courses of action, according FDOT's Rich Biter, assistant secretary for intermodal systems development.

Port Tampa Bay ceo Paul Anderson said the port has a responsibility to the state and the region to think ahead and to forecast trends five, 10, 20 and even 50 years down the road.

'Fortunately, we have a strategic partner in the Florida Department of Transportation that is also not satisfied with the status quo, but is committed to the pursuit of forward-thinking solutions to issues facing our state’s seaports, including issues such as the restrictions associated with the height of the Sunshine Skyway Bridge,' Anderson said.

This initial study is the first step in a phased approach to comprehensively understand the future of the cruise business in Tampa Bay, the port said in a release. It added: 'The facts are compelling enough to warrant forward action, beginning with a phase II study, ongoing discussions and concluding with a workable plan that has buy-in from an array of constituencies and publics.'

The pre-feasiblity study is here.