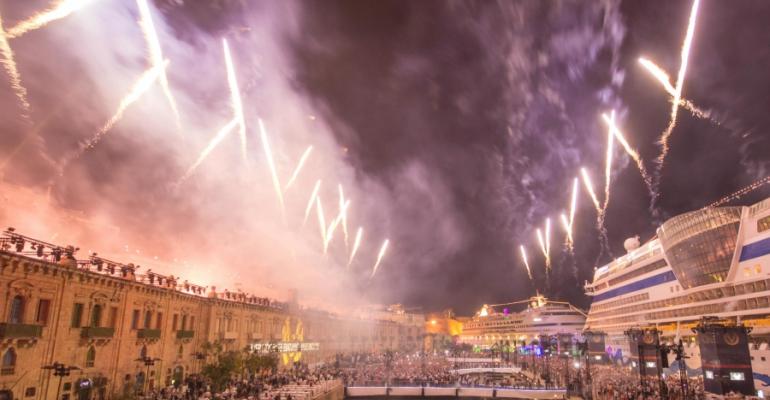 Tuesday was a busy day for the Mediterranean port of Valletta as it hosted five cruise ships.

The ships were greeted with a full gun salute from the saluting battery at the Barrakka Gardens and a water display by tug boats.

Valletta Waterfront hosted the event on an exclusive basis, featuring a light and pyrotechnic show. A special stage was built over the water at Laguna Marina for the
performances of several renowned artists including Gloria Gaynor, Kim Wilde, Sarah Connor, Captain Jack and David Garrett.

The event was the result of a successful collaboration between a number of stakeholders including On Site Malta - the local DMC responsible for the overall organisation, Valletta Cruise Port, Valletta Waterfront and local authorities.

Stephen Xuereb, ceo, Valletta Cruise Port said, ‘We are proud to have hosted this event which puts our magnificent port, facilities and the Maltese Islands in the limelight. A similar event was organised by DVAG some ten years ago in the same location. It reaffirms Valletta Waterfront as a prime destination for large scale events. We hope that we will have the opportunity to welcome similar events in the future.’

TUI Cruises’ Mein Schiff 2 was also in port on the day.