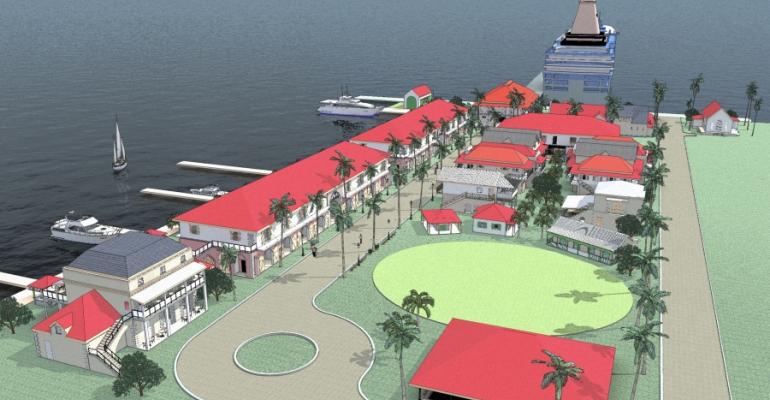 Tortola Pier Park
Though delayed by a few months, the work to expand and strengthen Tortola's cruise pier is progressing and British Virgin Islands officials hope both sides will be ready for two ships to dock by the end of April.

Mark Vanterpool, minister of communications and public works, said BVI expects to meet the target of having the pier ready for an April 29 call by Norwegian Cruise Line.

The pier is being extended by 400 feet, to 1,312 feet, and widened to 60 feet, while also being reinforced to accommodate large new-generation ships. BVI has long-term commitments from Norwegian and Disney Cruise Line.

Vanterpool said the marine side of the project and the welcome center should be ready by the end of April while some of the shops will be ready for outfitting at the Tortola Pier Park development by the end of May. Along with shops and offices, a 16,000-square-foot restaurant and a swimming pool are among the features.

It is hoped the entire landside project will be completed by the end of December, Vanterpool said.

Meanwhile, cruise vessels have been tendering passengers ashore while the pier construction is under way. Vanterpool said some 100,000 passengers arrived in the last two months of 2014, and most ships were keeping their calls despite the inconvenience of having to anchor. He praised the BVI Ports Authority for its efforts to facilitate the tendering.

Smith said he is pleased with the project, which he called very important for the development of the cruise business and BVI's economy.

Highlights of the tour are shown in a JTV news segment here, while a longer 19-minute clip showing the same material plus additional views of the marine works is here.