Canaveral's $110m 'smart' terminal nears finish, 4 more may be in the cards 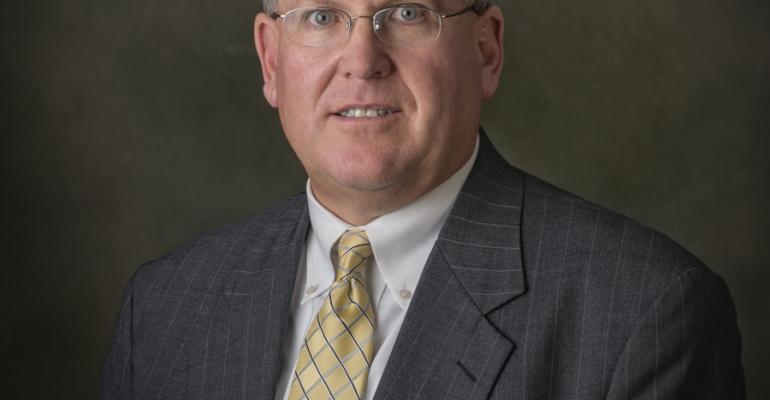 With a pier to handle the largest ships, 188,000 square feet of terminal space, a 1,000-car garage, on-site car rental, RFID luggage tracking, conveyor sorting and a warehouse, Port Canaveral's $110m Cruise Terminal 1 is shaping up to be a marvel. What's more, the port plans four new cruise terminals in the next 10 years—if the market grows as projected, ceo John Walsh told Seatrade Insider.

Cruise Terminal 1, to be used mainly by Royal Caribbean International for turnarounds and Norwegian Cruise Line for transit calls, is the first cruise facility located on the south side of the harbor, so passengers and crew can walk to dining and entertainment options.

Initially scheduled to open by the end of November, the facility will first be used in late December due to challenges on the water side, Walsh explained. Soil conditions and clay at 100 feet below grade impacted test piles, leading to some design changes. In addition, the demolition of the former south cargo pier 5 and removal of those piles took the contractor more time and effort than anticipated.

So now the first ship, Explorer of the Seas, is expected alongside Dec. 27, followed by Freedom of the Seas Dec. 28 and Enchantment of the Seas Dec. 29. In early 2015, Norwegian Breakaway and Carnival Pride will use the terminal mid-week. A grand opening will likely take place in mid-January.

Cruise Terminal 1 is designed for simultaneous disembarkation/embarkation and has four elevators, three escalators and a ramp. There are six conveyers for baggage sorting. A 5,000-square-foot warehouse with loading docks will help make ship storing more efficient.

'It's a "smart" terminal,' Walsh said. 'Our goal is eight minutes from arrival to the boarding bridge.' Royal Caribbean passengers will be able to track RFID-tagged bags via a mobile application.

In addition to the right hardware and technology, efficient processes have been planned with Customs and Border Protection's Jeannie Anderson and her team, who Walsh credits for their attention to the importance of customer service.

The new complex will have some retail, and a Caribbean village-style plaza that spills into the port's Cove restaurant and retail area with its Visitor Exploration Center. A hotel is planned at The Cove in 2015.

Besides building overall capacity, Cruise Terminal 1 enables Canaveral to begin renovating Cruise Terminal 10, used by Royal Caribbean, and shifts the cruise passenger focus to the south side of the harbor, providing seamless access to The Cove, 'It redefines the port from a traditional port into a destination,' Walsh said.

Cruise Terminal 1 will handle turnarounds from Fridays to Mondays and transit calls from Tuesdays to Thursdays, making it, in his estimation, 'one of the hardest working terminals in the country.'

The design-build team for the terminal and parking structure is led by Ivey's Construction of Merritt Island, Fla., includes Miami-based BEA Architects. Walsh acknowledged both for a 'phenomenal job' in a fast-paced 11-month time frame, adding that work continues 24/7.

Based on projections in a cruise market study by Bermello Ajamil & Partners, there is potential for strong growth.

'We have to build for this new generation of ships ... We're planning to do four new terminals in the next 10 years, if the market grows as projected,' Walsh said, adding that the port's capital plan has two of those in the budget during the next five years. All would go up on the south side. Design planning could begin in late 2015/early 2016.

Cruise Terminal 5 is becoming obsolete because it's too small for today's ships. Potentially, it could be renovated to cater to high-end vessels, if the demand existed. Or, it could be replaced with a new south-side structure.

There is plenty of jockeying to be the world's largest cruise port.

'We've decided we want to be the best cruise port in the world,' Walsh said. 'We want the passenger experience to be phenomenal.' That may lead to being the largest port, he added, because if cruisers are happy, lines will send more ships.

Canaveral's edge is proximity to all the Central Florida attractions. 'If we serve our customers well, for many passengers, this tie-in to Central Florida can provide two vacations in one,' the port chief noted.

Plus, Canaveral has cultivated transit calls and now is known as both a homeport and a transit port, with 168 transit calls annually. And, earlier this year, Canaveral nailed new 10-year deals with Norwegian and Royal Caribbean that vastly expand commitments from both companies. Carnival and Disney continue as important operators, too.

Walsh thinks there's plenty of business for all Florida homeports, from Jacksonville to Everglades, Miami and Tampa.

'All of us are working hard to build facilities that bring people to Florida. The industry will continue to grow for our state,' he said.