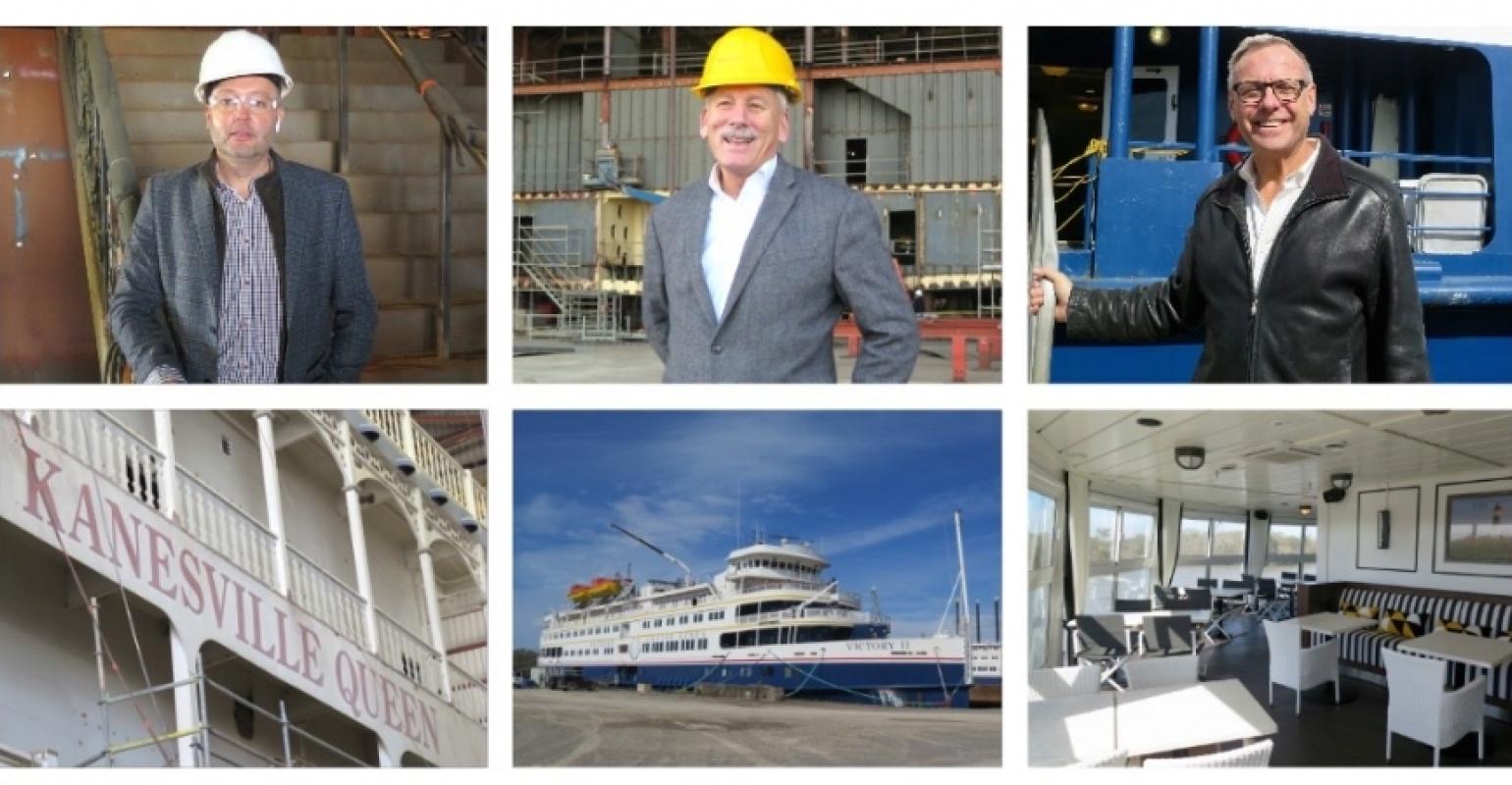 From top, clockwise, designer/project manager/EVP David Kelly, chairman/CEO John Waggoner, The Grill aboard Victory II, Victory II and Kanesville Queen (to become American Countess) PHOTOS: Anne Kalosh
A remarkable transformation of three vessels is taking place at Gulf Island Shipyards in Houma, Louisiana. There, a paddlewheeler is being built for American Queen Steamboat Co. (AQSC), and the two coastal vessels of Victory Cruise Lines are being refurbished under the new ownership of AQSC.

Inside a massive covered fabrication area, the former casino boat Kanesville Queen has been cut in half. A 60-foot midsection will be added to construct American Countess, the fourth vessel in AQSC's river fleet. It will stretch 361 feet and carry 245 passengers and 98 crew, and is to debut in April 2020 in the heartland.

Nearby, the 2001-built Victory I and Victory II are getting upgrades prior to starting Great Lakes service in April.

AQSC's parent, HMS Global Maritime, led by John Waggoner, and co-founder Terry MacRae's Hornblower attracted a new private equity partner in 2018. It is a US firm new to shipping, but Waggoner declined to identify the company or the level of its investment. When AQSC was founded, investors included the city of Memphis, a group of private Memphis-based backers and cruise veterans Roger Allard in the UK and David Bunn in Australia/New Zealand. All were paid off or cashed out.

Now the owners are the new private equity group, Waggoner and MacRae, whose companies were rolled into one entity, Hornblower Holdings.

'We were both growing very quickly and were both capital-constrained,' Waggoner told Seatrade Cruise News. Since the private equity deal, 'we've invested over $100m in the last six months.'

American Countess is being tailored for groups, so it has fewer cabin categories (four) and the kinds of smaller meeting rooms groups require. It also will be priced slightly lower than the large, historic American Queen steamboat and the boutique, all-suite American Duchess, which also sail in the heartland.

Waggoner said American Countess won't expand itineraries but will provide 'greater latitude' with 'a little more flexibility and maneuverability' to operate on the Upper Mississippi. Its air draft is 53 feet, compared to 55 feet for American Queen and American Duchess.

The four-deck vessel's accommodations will echo the modern style of American Duchess, while the public rooms will have a 'transitional' design with more traditional styling and some 'pizzazz' elements, according to David Kelly, EVP hotel operations and newbuild for AQSC/Victory, the designer. Accommodations will range from 170 square feet to 255 square feet, without the big suites and two-deck lofts of American Duchess.

Deck 1 houses the Grand Dining Room with towering windows, the Theater and the Grand Lobby, with a café and a fitness center flanking the grand staircase/elevators. Deck 2 is home to the alternative dining venue River Grill and a library and card room, as well as accommodations including the deluxe staterooms with private veranda. Deck 3 has a Chart Room and accommodations including staterooms with open veranda and one single outside stateroom. The pilot house and a walking track are found on Deck 4, the sun deck.

The Kanesville Queen had a 1,800hp engine and three Z-drives. In the American Countess construction, a new 2,000hp paddlewheel will be added, along with new bow thrusters and a new air conditioning system.

Kelly said the project is worth $42m plus an estimated $3.5m to $4m in owner's supplied items like furniture and chandeliers.

It's very different from the 2016 building of American Duchess, also from a former casino boat. Since AQSC was so capacity-constrained, just 10 months were allowed for its design and construction at Bollinger Shipyards. In contrast, 21 months are budgeted for American Countess, so seven months of planning and Coast Guard approvals preceded the vessel's arrival to Gulf Island.

'With American Duchess, we started executing the same time as we were planning,' Kelly said. 'We were getting Coast Guard approvals as we were building. We'd put up a wall and hope it would be approved. There was pressure because we needed beds.'

Another advantage this time around is Gulf Island's covered fabrication area. This makes it possible to work protected from southern Louisiana's torrential rains, which contributed to the delay in completing American Duchess at Bollinger.

Of the five yards invited to bid on the American Countess project, only Gulf Island offers this covered facility.

Unlike the smaller-occupancy, all-suite Duchess, American Countess will have two-seating dining and two nightly show performances.

The new paddlewheeler is scheduled for delivery Jan. 15, 2020, and the christening will take place the first week in April, giving ample time for outfitting and crew training.

American Countess is to be named in New Orleans by Waggoner's oldest daughter, Angie, using a bottle of Kentucky bourbon instead of the traditional champagne.

'We wrap ourselves in the American flag. Our guests love it,' Waggoner said. 'We're made in America, built in America, hire from middle America and use bourbon [for our namings].'

Routes haven't been announced, but 'Our most popular itinerary is New Orleans-Memphis, two great anchor cities,' Waggoner said, citing New Orleans' jazz and the blues and barbecue of Memphis. A pre-cruise hotel stay is included.

While Louisville is 'gaining traction,' with a Kentucky Derby cruise selling out in one day, the challenge is high water in the spring. Nashville sells 'extremely well,' however it's a tight squeeze through a railroad bridge. 'We love being docked in downtown Nashville but from a navigational viewpoint, we can't do it reliably,' Waggoner said. So AQSC promises Clarksville and buses passengers to Nashville.

American Duchess has sailed the Illinois River to Ottawa, near Chicago, and 'guests loved it, but can you sell it?' he added. The Ohio River is one of the prettiest and there are no worries about locks or bridges getting to Pittsburgh, but consumer demand may not be adequate to increase sailings.

Victory I and Victory II

These 2001-built coastal vessels are getting tonier public areas thanks to the addition of wainscotting and new or reupholstered furniture. The restaurant service will be upgraded to provide greater choice, with menus of five or six courses. Beds will gain 14-inch pillowtop mattresses and fine linens to match the AQSC standard.

'The public spaces are all fairly white and bland, not really Americana,' Kelly said, so new colors and furnishings will make them more closely resemble the AQSC fleet. In the staterooms, tropical colors like aqua will be changed out.

On an upper deck, Victory I will be getting an enclosed alternative dining venue, the Grill, added to Victory II in a refurbishment last year and extremely popular. A grill menu will replace the existing hot rocks concept.

The Lounge will be getting new chairs and a new sound system. Adjacent late-night venue the Tavern, which has beautiful stained glass detailing, will also gain new furniture and possibly a baby grand piano or instrument combo.

Crew accommodations will be improved with new mattresses and televisions.

AQSC is retaining Miami's CMI Leisure to provide hotel management for at least the first year of service. All the crew have worked aboard the Bahamas-flagged vessels for a few seasons. 'We'll see. We may get to the end of the year and say it's a great relationship, let's continue—or make changes,' Waggoner said. 'We have to be sure the delivery standards are being met.'

Each ship carries just 202 passengers, served by 84 crew, 'so there's no reason why the service can't be phenomenal.' AQSC's Sarah Neelis is now manager of hotel operations for the Victory ships, and some AQSC officers will join.

Victory pricing is inclusive of drinks and tours. AQSC is sticking with the line's tour operator this year then will evaluate whether to introduce the well-liked 'hop on, hop off' tours characteristic of its river vessels.

The ships will operate May through October on 10-day, all-inclusive Great Lakes voyages, with Victory I sailing between Montréal and Detroit and Victory II between Toronto and Chicago.

As earlier reported, three cruises featuring Mexico's Yucatán Peninsula are likely to cap the season, however the ships will end in Freeport for winter layup, rather than in Houma. Cuba, which had been planned by Victory's former owners, is not in the cards.

To accommodate the capacity growth, a number of promotions and new hires were made. For example, executive chef Paul Wayland-Smith was promoted to culinary director for all the AQSC vessels. And Jim Unger, who worked for Hornblower's dinner cruise operation for 25 years, was appointed VP hotel operations for AQSC after HMS Global Maritime EVP Gary Seabrook retired.

Unger, who most recently served as VP and general manager of San Diego for Hornblower, said he'd been enamored with AQSC since American Empress was launched in the Pacific Northwest in 2014.

He has been recruiting talent, starting with hotel manager Tom Armstrong, who came from big ship Oasis of the Seas keen for the chance to personally make a difference on a more intimate vessel. Amstrong will take over American Queen.

Another professional signing on with expertise from larger properties like the Four Seasons, The Wynn and The Venetian Resort Las Vegas, Anders Tystad will join in March as lead hotel manager for American Duchess.

A third new hotel manager will be announced shortly.

Unger said all are team-builders who focus on guest care and crew care.

'American Queen guests have always appreciated the authenticity of the crew, the warm interactions. We have a lot of repeat guests who know all about the crew and their families,' he said. 'We want to continue with that authentic warmth while adding some finesse that ups our game a little bit in terms of quality and consistency.'

For example: 'We have to get it right on the timing and serving etiquette so the dish gets to the table with the style and temperature and look our guests deserve.'

Retention, always a challenge with US crew who can simply walk off if they're not happy, is one of Unger's top goals. Retention hinges on professional leadership on board and opportunities for growth and advancement.