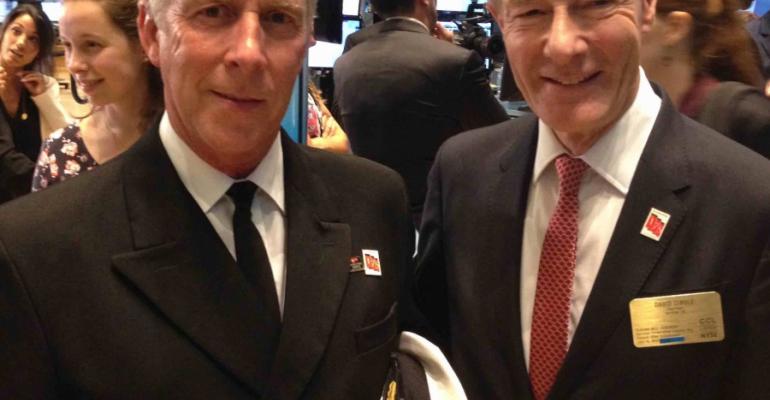 Part of Cunard Line's 175th anniversary celebrations, the event linked the economic and industrial achievements of Cunard to the trading and business capital of the United States. In the morning Queen Mary 2 had reached the end of a journey that paid tribute to the original trans-Atlantic voyage made by Cunard’s first flagship, Britannia, in July 1840.

Cunard was honored at the NYSE on a day when Carnival Corp. shares coasted to a 52-week high of $52.40. No wonder company leaders were in good spirits.

Before the closing bell chairman Micky Arison, ceo Arnold Donald and a bevy of Carnival Corp. & plc directors, chief executives and presidents from around the world—in town for a board meeting—gathered in the historic NYSE boardroom, the stock exchange's original trading floor, for a Veuve Clicquot toast and a salute by NYSE officials. Noting the stock's performance, Donald acknowledged Beth Roberts, vp investor relations, for 'a great job.'

Both Cunard and the NYSE embody the power of industry and have illustrious histories, Cunard North America president Rick Meadows told Seatrade Cruise News in the hallowed chambers that contain the original bench where securities were traded.

'It all happened in this room. To touch this kind of history—it's very apropos today with us recognizing Cunard's 175th anniversary and our relationship with New York City,' Meadows said.

Out on the floor Capt. Oprey ringing the closing bell capped a stream of extraordinary experiences in recent days including laying a wreath at the grave of Sir Samuel Cunard's wife in Halifax and throwing the ceremonial first pitch at the Boston Red Sox baseball game.

'Today is a great day. Every event we've taken part in has had great significance,' Oprey said, reeling through a list of highlights during the Queen Mary 2 voyage tracing Britannia's first journey. Still ahead Tuesday night: Oprey would helm the liner to the Statue of Liberty for a pre-sail-away sound and light show.

Dingle called it a 'fantastic honor' to be asked to strike the closing gavel. He gave it two commanding whacks. Explaining his technique, Dingle noted that as a child, he was 'practiced in chopping down trees. It was similar—giving it a good swing.'

Holland America Group ceo Stein Kruse has been to three or four bell ceremonies. What set this one apart were the festive atmosphere Carnival created outside on Wall Street—Arnold Donald had even danced to 'YMCA' before going on to the more serious business of a live CNBC interview on the floor—and the fact there was a very large group on the closing bell podium. Representatives of Carnival's 10 brands witnessed the moment.

'That was impressive,' Kruse said. 'I'm a little boy from Norway and standing in the cradle of the American financial might is pretty awesome.'

Among the executives attending their first bell ceremony were some of the company's newest presidents: Tara Russell of fathom, Christine Duffy of Carnival Cruise Line, Orlando Ashford of Holland America Line and Buhdy Bok of Costa Asia.

Jan Swartz, who has helmed Princess Cruises since 2013, also was at the NYSE for the first time. 'I'm so happy to be here,' she said, 'to celebrate Cunard's 175 years and the investment our company has made in this iconic brand.'

'It is a great experience, no matter how many times you go back,' according to closing bell veteran David Bernstein, cfo of Carnival Corp., who cited the history of the stock exchange building. 'There were deals struck with the Indians in the boardroom,' he marveled.

For Micky Arison, who's been at bell ceremonies 'four, five or six times'—so many, he doesn't remember—'It's all great.' One thing's for sure: His first was Carnival Cruise Line's initial public offering in 1987, which laid the groundwork for the company's growth into the world's largest cruise entity. At that time, he rang the bell and his wife Madeleine struck the gavel.