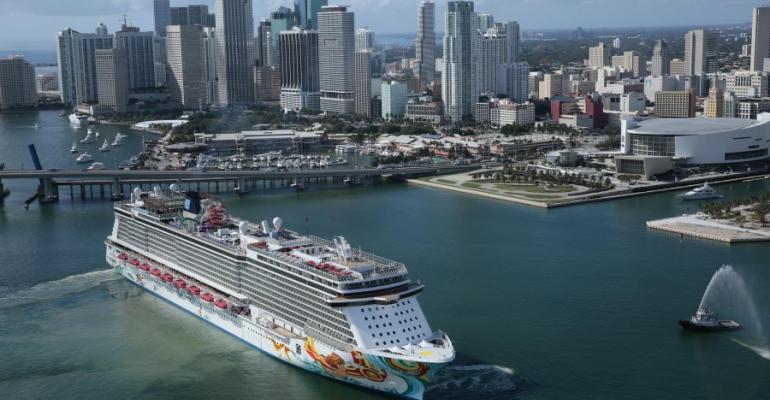 Despite being Norwegian Cruise Line's newest ship, Norwegian Getaway sailings are priced at a 5% to 10% discount to the company's 'legacy' Caribbean-based fleet through the second and third quarters, according to a Wells Fargo Securities pricing survey.

However, this reverses in Q4 and Q1 2015, when the Miami-based Norwegian Getaway is commanding a 5% to 10% premium.

'We believe the intense competition for entry-level Caribbean product, especially based in Florida, from the Carnival brand's rebuilding and aggressive MSC pricing is putting pressure on Getaway despite it being the newest NCLH ship,' Wells Fargo analyst Tim Conder said in a note.

Since Norwegian's last guidance in late April, the brokerage's pricing study indicates Bermuda, Bahamas and Caribbean pricing modestly weakened for Q2 and Q3 sailings, while pricing for Q4 sailings in the area is flattish/slightly higher. And Q1 2015 Caribbean/Bahamas pricing is slightly down.

Wells Fargo found close-in pricing softening on a limited amount of Q2 inventory, and to a lesser degree in Q3. Pricing is more concerning for Norwegian Getaway, the brokerage said, relative to the New York-based Norwegian Breakaway and the company's older Caribbean ships, including Norwegian Epic.

Norwegian Breakaway's average pricing has been 'healthier' through Q1 2015, with the exception of slight discounting in early February. Wells Fargo found the ship's close-in pricing holding steady in Q2 and Q3, while the premium spread relative to the line's 'legacy' fleet has narrowed for Q4 and for Q1 2015.

'We believe NCLH shares largely reflect a weak 2014 Caribbean and investor concerns that Caribbean prices have not yet stabilized. However, based on Q4 2014/Q1 2015 NCLH pricing trends, Caribbean pricing could be approaching a stabilization inflection point,' Conder said in a note.

Wells Fargo continues to believe Norwegian can achieve its 2014 net yield guidance of up 3% to up 3.5%, and expects ongoing cost management initiatives will help offset any further marginal pricing weakness. The brokerage affirmed its 'outperform' (buy) rating and EPS estimates of $2.33 for 2014 and $2.71 for 2015, not factoring in any potential share repurchases. The valuation range of $38 to $40 remains unchanged.