Carnival accepts #IceBucketChallenge and gives $100,000 to ALS—as does Arison personally 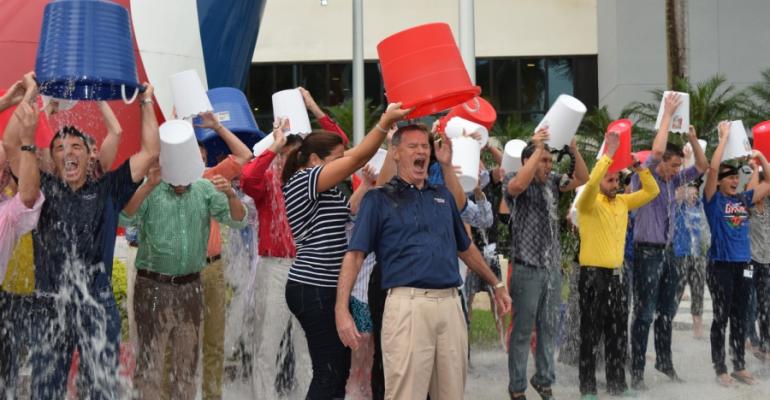 As of Sunday, the ALS Association reported receiving an unprecedented $13.3m in donations. That compares to $1.7m during the same time period last year (July 29 to Aug. 17).

The challenge involves people getting doused with buckets of ice water on video, posting that video to social media, then nominating others to do the same—all in an effort to raise ALS awareness. Those who refuse to take the challenge are asked to make a donation to the ALS charity of their choice.

In the case of both Carnival and Arison personally, they got drenched and donated.

Carnival Breeze was the first Fun Ship to take up the challenge with cruise director Mitcham dumping the entire contents of the 150-gallon PowerDrencher tipping bucket in the ship's WaterWorks water park, and then challenging the line’s other 23 vessels to take up the cause.

All the ships—which are sailing in regions spanning the Caribbean, Alaska, the West Coast and Australia— rose to the challenge, with seagoing personnel undergoing their own chilly drenchings.

The #IceBucketChallenge was extended to Heald, who is sailing in Alaska aboard Carnival Miracle. He then challenged Cahill in Miami, who led a group of a couple dozen employees including senior executives Jim Berra, Mark Tamis and Terry Thornton. All were drenched in front of Carnival headquarters.

Arison Instagramed his own drenching Saturday—complete with expletive reaction to the bucket of ice water—and tweeted @MickyArison he would match Carnival's $100,000 donation, then challenged ceo Donald and the Miami Heat's Pat Riley. Riley challenged Bruce Springsteen and Michael Douglas ...

Donations to the ALS Association can be made at www.alsa.org.