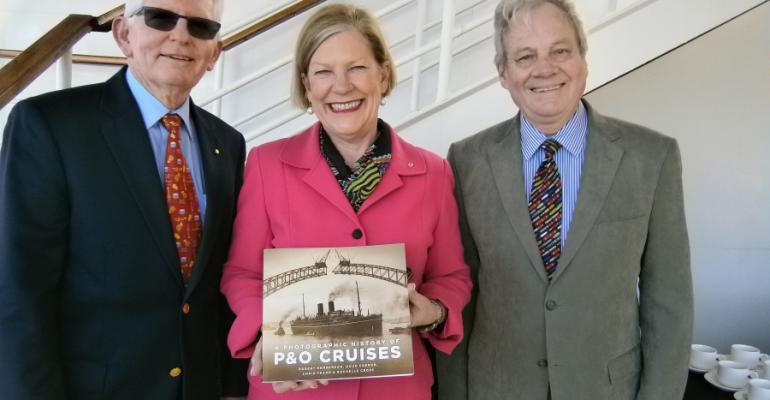 Carnival Australia ceo Ann Sherry described Robert Henderson as a ‘keeper of the P&O flame’ at the launch of his book, 'Photographic History of P&O Cruises,' on board Pacific Pearl in Sydney Harbour today.

It showcases more than 175 years of P&O history from the formation of the company to the current fleet and has a strong Australian focus with illustrations from the Henderson and Cremer Collection.

This invaluable collection of historical photographs, postcards and posters began 45 years ago when Henderson, who had joined P&O’s Sydney office in 1963, was given just three hours to salvage what he could of P&O and Orient Line archives that were about to be destroyed.

Over the years Henderson and Cremer have added to the collection with purchases and gifts and Henderson is a sought after shipboard lecturer.

‘You have only to flip through the pages to see that this has been a labour of love and a monumental task executed so beautifully by Rob, Doug, Chris and Rachelle,’ Sherry told guests enjoying champagne, coffee and pastries on a sunny open deck aboard Pacific Pearl.

‘I always think of Rob and Doug as the keepers of the P&O flame,’ she said. ‘They have cared for our heritage and the line’s rich history for many years.

‘Whether it is the mail steamers of the nineteenth century, the birth of Australian cruising in 1932, the assisted passage scheme that brought a million ten pound Poms to these shores or the modern resurgence of cruising, P&O has always been in the thick of it -- leading it more often than not.

‘There are so many facets to this book which confirm just how much P&O has been an integral part of Sydney for more than 150 years along with its huge contribution to nation building.’