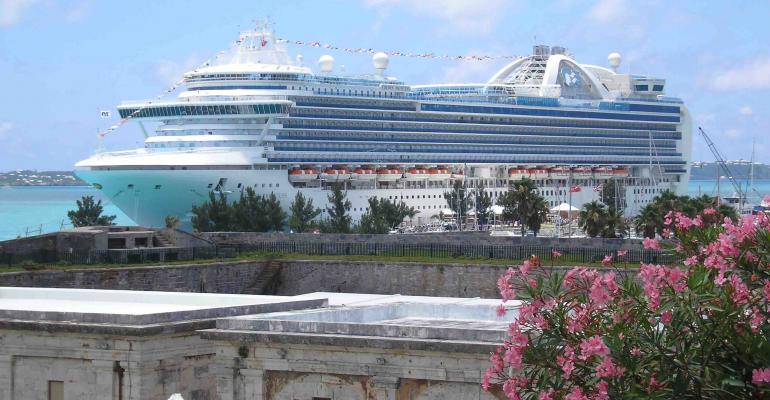 The ships of Carnival Corp. brands have a total of 59 stops booked in Bermuda this year, or fewer than 15% of the cruise visits. Pictured: A Princess ship at the Royal Naval Dockyard

Carnival Corp. & plc has come out in active support of a legal challenge to Bermuda's recent reversal of a law that allowed same-sex marriages.

Princess Cruises, Cunard and P&O Cruises are among the Carnival brands with ships registered in Bermuda, where a May 2017 ruling by the Supreme Court condoned and recognized same-sex marriages, which enabled the ships flagged there to legally perform these ceremonies at sea.

Beginning in summer 2017, the brands began booking on-board wedding packages for same-sex couples wishing to marry at sea, with the same legal recognition as opposite-sex couples.

But in February, a new Bermuda law, the Domestic Partnership Act, reversed the legality of same-sex marriages, instead allowing 'domestic partnerships.'

Backlash against Bermuda has been gaining steam

Since then, a backlash against Bermuda has been gaining steam, which could sway travelers from visiting the island, a seasonal cruise destination for a number of lines.

Today, Carnival Corp. acknowledged it is actively supporting OUTBermuda—a registered charity that promotes and supports the wellbeing, health, dignity, security, safety and protection of the LGBTQ community—along with another plaintiff, Maryellen Jackson, in their joint legal challenge of the Domestic Partnership Act on the grounds that revoking same-sex marriage or making same-sex marriages void violates the Bermuda Constitution 1968.

Carnival Corp.'s engagement includes providing OUTBermuda with financial, civic and public relations support, and the company said it intends to file an affidavit supporting the legal action submitted by OUTBermuda and Jackson.

According to OUTBermuda, the legal challenge is set to be heard by the chief justice in May.

Carnival Corp. said it believes employees, guests and the public at large deserve equal dignity and respect, and its efforts have been recognized over several years by various organizations, such as the Human Rights Campaign, as one of the top companies to work for LGBTQ equality, including perfect scores in 2017 and 2016.

'As such, we believe that marriage equality should be lawful in Bermuda,' the cruise giant said, adding that it had applauded the May ruling in Bermuda’s Supreme Court allowing and recognizing same-sex marriages on the island.

'Travel and tourism brings people and cultures together'

Today Carnival Corp. indicated it's sensitive to why some travelers may consider avoiding Bermuda while the same-sex marriage ban is in place.

'While we always abide by the laws of the countries we sail to and from, we believe travel and tourism brings people and cultures together in powerful ways. As a result, we believe it is important to stand by the LGBTQ community in Bermuda and its many allies to oppose any actions that restrict travel and tourism,' the cruise giant stated.

Ongoing meetings with LGBTQ community organizations based in Bermuda have shared their own concerns that both the existing law and any potential reduction of travel to Bermuda will have a negative impact on the local economy and locals who depend on tourism for their livelihood. 'At their urging, we believe it is best to align our actions with the LGBTQ community and others who live and work in Bermuda and depend on tourism for their living,' Carnival Corp. said, adding that for those reasons, the company believes it can have the most significant impact through direct action such as supporting the legal process challenging the decision.

Six of Carnival Corp.'s nine brands are scheduled to visit in 2018, making a total of 59 stops, or fewer than 15% of the cruise visits. The ships of other lines are booked for a combined 282 calls this year.

A couple other major cruise operators did not immediately respond to queries about their stance on the Bermuda legal challenge.