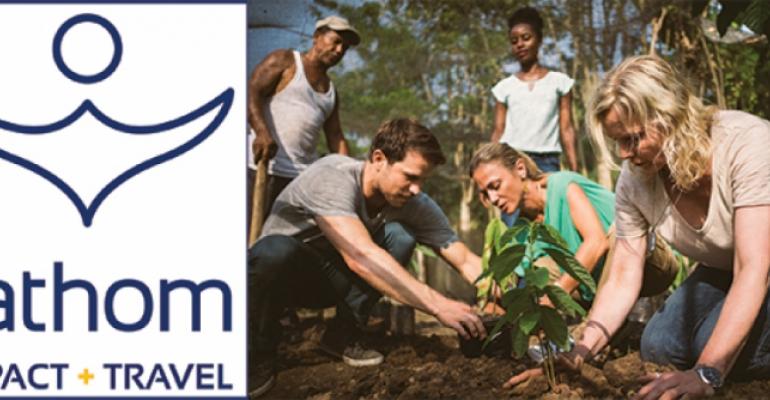 Updated with reactions from financial analysts and a key retail group. Carnival Corp. & plc's new brand, fathom, offers cruisers the opportunity to participate in authentic, meaningful projects that help the communities they visit—on a scale that may be unprecedented.

Trips will begin in April 2016 from Miami to Carnival's new Dominican Republic port, Amber Cove, where cruisers can participate in a range of activities over four days. The seven-night program will operate on the 710-passenger Adonia, redeployed from P&O Cruises.

The initial destination partner is the Dominican Republic's Puerto Plata area. Seatrade Cruise News believes fathom could become a suitable vehicle for people-to-people cruises to Cuba at some point, though that hasn't been mentioned.

'Fathom will cater to an underserved market of consumers who want to have a positive impact on people’s lives, and aren’t always sure where to begin,' said Arnold Donald, ceo of Carnival Corp.

Cruisers may work on projects related to potable water, for example, or literacy or agriculture, all in partnership with local people.

Carnival calls it 'social impact travel.' Several cruise lines already offer ways for passengers to volunteer in destinations, but fathom will go far beyond that, sending tens of thousands of people to get involved in initiatives on a scale the brand's president hopes could change society.

'We created fathom to meet the real hunger in the world for purpose, while at the same time tackling profound social issues through a sustainable business model,' president Tara Russell said.

Travelers will have a choice of projects and experiences that range from a few hours to several days. They may help cultivate cacao plants at a nursery and assist a women's cooperative in producing artisan chocolates. Or they may teach English, or build natural clay water filters for families. When not participating in social impact activities, cruisers can explore the Puerto Plata region and use Amber Cove's recreational facilities.

Besides heading fathom Russell will serve as global impact lead for Carnival Corp., working with the 10 brands on social impact strategies, and reporting directly to ceo Donald.

In market research, fathom identified a sizable and growing market of potential travelers—approximately one million North Americans, in addition to global travelers already pursuing service-oriented experiences worldwide—who are interested in this type of travel.

The company also expects fathom will attract a significant number of people who have never cruised, an estimated 40% of the business.

According to Russell, fathom will draw people of all ages and from all walks of life, but especially US citizens ages 20 to 60. Millennials looking to make a difference, parents seeking to open their children's eyes to other cultures and adults 50 and over eager to help people in ways other than writing a check are among the targets. About half the passengers are expected to be families.

Because fathom will deploy 700 passengers a week, or tens of thousands of people a year, the scale for this type of travel may be unprecedented.

'Our ambition is to holistically transform the destinations we visit,' Russell said. Long-term, 'I'd love to believe we've eradicated unemployment in the Dominican Republic, given children tools to fall in love with education, that the places we visit are better from an environmental perspective, and people are healthier.'

The brand is incorporated in the UK. P&O Cruises will operate the ship and provide hotel and food and beverage services, and fathom will be supported by other Carnival companies. For instance, it will use the Holland America Group's POLAR reservations and yield management system.

Sales and marketing will be handled by fathom's own team, which currently consists of about 20 people—among them, travel/cruise veteran executive David Drier, vp fleet operations and sales—and will grow to about 30 over the next year. VP marketing is Stephen Seabolt, a veteran of the Coca-Cola Co.

Reservations open today at www.fathom.org and, starting in the fall, travelers will be able to begin building their customized experience.

Cruise fares start at $1,540 per person. A portion of the ticket price will go directly to fathom partner organizations to cover on-the-ground activities and support the organizations’ overall missions.

Russell set fathom's first objective as developing long-term sustainable projects in the northern region of the DR, working with proven organizations and offering highly structured activities that don't take jobs from local people. Two lead partners are Entrena and the Instituto Dominicano de Desarrollo Integral (IDDI), both with deep roots in the country.

Carnival Corp. is making a 'strategic bet on contributing to the development of the Dominican Republic incorporating this initiative into their business plan, which is to me a remarkable step for a corporation of their size,' said David Luther, founder and executive director of IDDI.

In his view, this is not just 'corporate social responsibility' but also 'very, very innovative.'

Russell wasn't ready to talk about potential future destinations beyond the Dominican Republic, but she sees vast potential—not just for fathom, but Carnival Corp. as a whole.

'The company has seven [office] locations, nine other brands and 11 million other passengers,' Russell said. 'We expect to break into a unique market share.'

As for Cuba specifically, 'The whole world is focused on Cuba,' she told Seatrade Cruise News. 'We are now focused on the Dominican Republic. We look forward to working with other destinations.'

In early reactions to the fathom concept, Cruise Planners ceo and co-founder Michelle Fee deemed it 'brilliant' and predicted the brand will draw new people to cruising.

Wells Fargo Securities told investors this is an 'outside the box, innovative approach for CCL' that could tap a new segment of consumers and perhaps harness some smaller, older vessels. Analyst Tim Conder said the brokerage would closely monitor the development for growth and the potential to impact profitability.

The $1,540 starting ticket price compares very favorably with some other seven-day Caribbean voyages, according to UBS Investment Research, which put the range at $950 to $1,200 for April cruises on the three largest broad-market brands.

The fathom concept is perhaps not as scalable as some other brands, since it wouldn't likely work on a 2,000-passenger vessel, UBS analyst Robin Farley said. But she added Carnival has at least two other small, older ships of a similar size that could be added to the brand over time.

'Fathom is a unique offering for a cruise line, it is a new use for old tonnage, and it will attract new first-time cruisers,' Farley said.