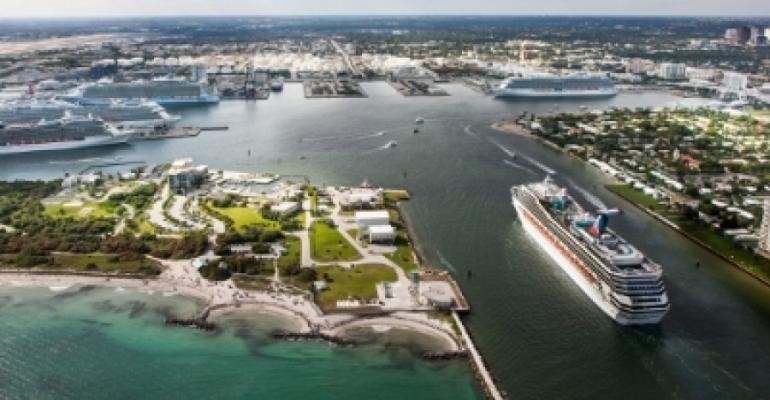 Carnival Corp. & plc on Tuesday signed an addendum to one of its most strategic passenger terminal agreements, extending the contract through 2030 with an additional five years of sailings to and from Port Everglades, one of the world's top three cruise ports.

The addendum builds on the landmark 15-year agreement reached in 2010 with the Broward County Board of County Commissioners and furthers Carnival Corp.'s commitment to Port Everglades, which overall has more than 3.6m multi-day cruise passengers a year. The business generated from Carnival Corp.'s brands operating at the port produces a significant economic impact for the port and the county.

As part of the addendum, Carnival Corp. will have preferential use of Cruise Terminal 4, which reopened last year after $24m worth of renovations and upgrades designed for greater efficiency and passenger convenience.

Additionally, the port is currently undertaking an estimated $13.6m slip extension project on Terminal 4, expected to be complete by the middle of 2017, that will lengthen the slip to accommodate larger cruise ships.

As part of the long-term agreement, Carnival Corp. also has preferential use of terminals 2, 21 and 26, along with one additional terminal. This provides five terminals in total for the cruise giant.

With the extension, the parties will engage in discussions about possible further improvements to Cruise Terminal 21 to accommodate Carnival Corp.'s newest class of ships.

Port Everglades ceo and port director Steven Cernak called Carnival Corp. a critical partner and said its brands provide a wide variety of cruise experiences and itineraries. The company has a strong, long-standing presence in the Broward County community, and the agreement reinforces that commitment, he said.

Furthering its port commitment, Carnival Corp. will add a second ship from Carnival Cruise Line, Carnival Splendor, at Everglades during the 2017 summer season. Altogether the Carnival brand, HAL and five more of the company's lines currently carry nearly 1.5m passengers to and from Port Everglades each year. The lines include Costa, Cunard, P&O Cruises, Princess Cruises and Seabourn.

Twenty-eight ships of the seven brands account for a combined average of more than 300 calls at the port each year.

'Florida is the largest cruise market in the world, and we are thrilled to extend our agreement with Port Everglades, which is an extremely convenient and popular location for our guests with close proximity to Fort Lauderdale-Hollywood International Airport and the Caribbean, the world's most popular region for cruise vacations,' said Giora Israel, svp global port and destination development, Carnival Corp.