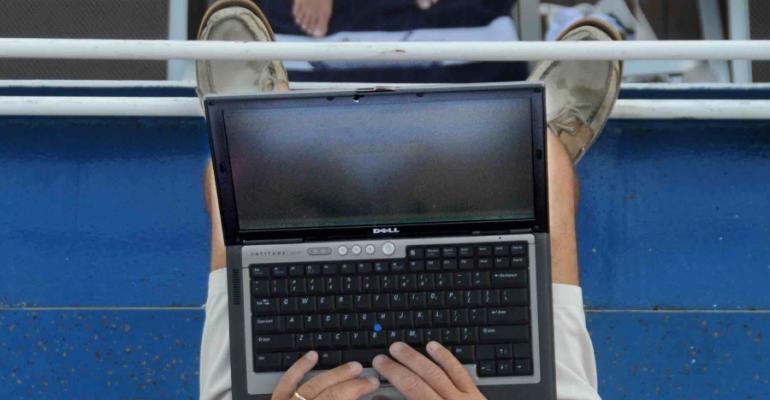 Wi-Fi usage has increased 'significantly' across the Carnival Corp. fleet and individual brands offer special packages and plans. Here, a Carnival Splendor cruiser stays connected (Photo: Carnival Cruise Line)
Carnival Corp. & plc now deploys its fast [email protected] network across nearly a third of its fleet—30 ships—with plans to expand the system on the majority of its 100 ships across its 10 global brands through 2016.

Being able to offer the high-speed Internet consumers expect across fleets and around the world—not just a few ships in certain locations—is a competitive advantage Carnival Corp. is stressing.

It includes the ability to share bandwidth across satellites and to dynamically shift bandwidth from ship to ship and brand to brand, optimizing connectivity and reliability. If a ship is close to land or in port, it's likely connected to a terrestrial system, while mid-ocean, it will be on the satellite. If bandwidth isn't being used by one vessel, that can be shifted to supplement another vessel where the demand is higher.

'We're purchasers of a lot of bandwidth, which is key,' Rasoulian said. But the company's advanced modeling tools and proprietary software that dynamically manages the system are also vital components.

Plus, a number of Carnival brands, including Carnival Cruise Line, AIDA Cruises and Holland America Line, have introduced new plans and pricing packages that make Wi-Fi more convenient and affordable. There has been a shift from per-minute pricing to more economical packages for a day or a full cruise, and even special plans that facilitate social sharing.

Carnival Cruise Line's social media Internet package, for example, gives access to a variety of popular websites for $5 a day.

Internet usage has increased 'significantly,' Rasoulian said. In some cases, up to 800 passengers per ship are connected at a time.

And faster, more reliable and more affordable Wi-Fi is important to the crew, too. Rasoulian described a crew member's joy at being able to Skype with a young daughter back home.

That's 'powerful,' he said. 'This is absolutely helping our crew welfare.'

How fast is [email protected]? Instead of specifying download speeds, Rasoulian compares the system to a mobile device experience. And he said that in some cases, his iPhone works faster aboard ship than ashore.

Plus, in facilitating cruisers' ability to share their experiences in real time with their social networks back home, this raises awareness of cruising with a broader market.

As the [email protected] wave extends to more ships in the Carnival Corp. fleet, some 40% are expected to be covered by year's end, with the rollout to most ships by 2016.