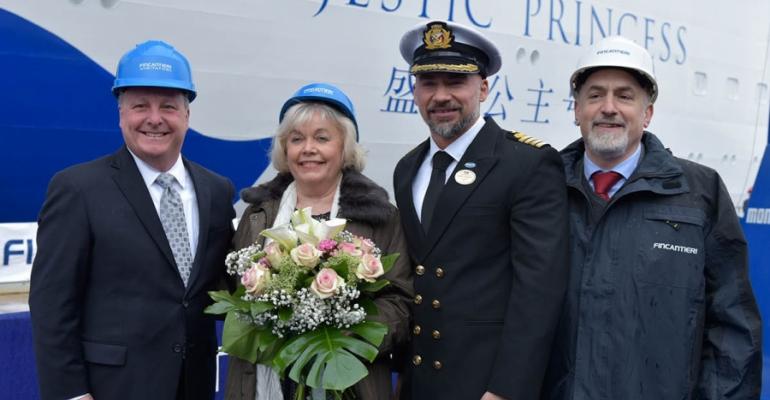 When Majestic Princess and AIDAbella join the China lineup next year, the increase will be equivalent to just one 4,000-berth vessel, Arnold Donald says

In the thick of uncertainties about Britain's exit from the European Union, cruise analysts were more focused on China during Carnival Corp. & plc's earnings call. Investors are concerned about the rising capacity there.

China continues to deliver an accretive return on invested capital despite the company's 60% capacity increase this year, Carnival president and ceo Arnold Donald said. Booking volumes are up, with occupancy comparable to prior levels. Yields, though, are down.

Previously, ticket prices in China were higher than the fleet average. At this point, fares are in line with the fleet average, Donald said, reminding analysts that Carnival ships in China are all in the contemporary market segment. He said they are yield accretive for their respective brands.

Carnival's China capacity will grow an additional 30% in 2017 to make up 6% of the company's global capacity.

The concern among investors is that as more supply is added, pricing could decline to the point where it is not accretive at any level, UBS analyst Robin Farley said in a note. So despite the fact that Carnival raised its 2016 yield guidance, the China controversy will continue in 2017, she added.

While the capacity increases sound large, Donald pointed out next year's addition of Majestic Princess, purpose-built for Chinese travelers, and AIDAbella, AIDA Cruises' first ship in the market, are equivalent to adding one 4,000-berth vessel in a year. This, in a cruise market that one day may overtake all others.

Carnival now has 12 offices in China and is opening more, according to cfo David Bernstein. He said efforts to educate travel agents about cruising continue.

Currently, though, it's largely a business-to-business market since most ships are chartered to companies that resell to consumers and agents. Given that more competitors, such as MSC Cruises and Norwegian Cruise Line, are moving into the market, analysts asked if the charter negotiations are taking any new turns.

Donald maintained there's 'no greater intensity or fundamental change in tone or nature' from the past.

Distribution is starting to expand, though. To now, Carnival worked with about 10 main charterers, starting in the Shanghai area, where most ships were based. Things are fanning out.

According to Bernstein, China has 26,000 travel agents; just 2,600 are licensed to sell international travel. 'We're dealing primarily with 250 to 300 travel agents who have large groups or parts of charters. They're also selling through the other 24,000 agents around the country,' he said.

Even with other competitors adding ships, China's cruise market penetration is still well under 1%, Donald noted, and Carnival still expects additional earnings there.

'There may be some bumps,' he added. 'Overall, China is a robust opportunity.'