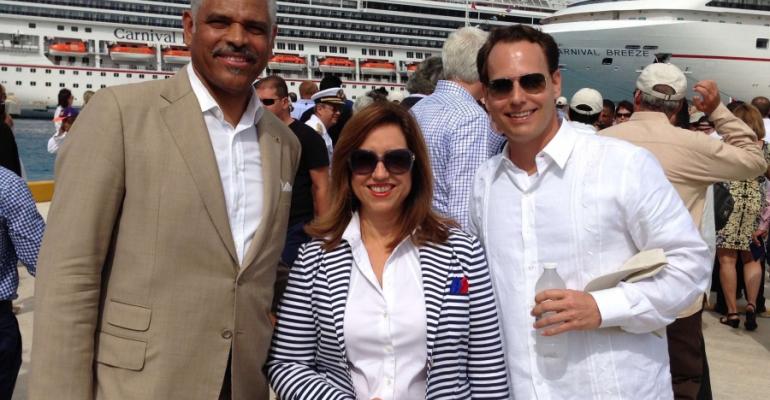 Carnival Cruise Line president Christine Duffy, joined by the captains of the three ships, officially opened the facility in the presence of corporation chairman Micky Arison, ceo Arnold Donald and numerous other company executives as well as Mexican officials.

Giora Israel, svp global port and destination development for Carnival Corp., called it 'a major milestone for our company' and 'a memorable day for our business partners in Mexico.' Carnival's expansion, he added, is expected to have an important economic impact in Cozumel.

The pier's opening had a poignant aspect since it underscored how Cozumel has rejuvenated following the devastation of Hurricane Wilma in 2005, which also caused significant damage to the Puerta Maya pier.

The opening of the $20m third berth at Puerta Maya follows by just two days the first ship call at Carnival's $85m Amber Cove port in the Dominican Republic. Israel acknowledged David Candib, vp development and operations; José Negrón, who oversees operations at both Puerta Maya and Amber Cove, and Armando Corpas, who led the Amber Cove construction and worked with the contractors, for their contribution in completing the two projects 'on time and on budget.'

For Candib, Amber Cove and Puerta Maya demonstrate the company's commitment to the Caribbean and the Americas. 'We're not done,' he added.

It's been an emotional few days seeing these major initiatives realized. Candib said the support of Arison, Donald and Alan Buckelew, chief operations officer, along with the help of the local communities, made it all possible.

In Cozumel, 'It's a thrill for us to welcome three ships alongside,' Candib told Seatrade Cruise News. 'It's an incredible destination.' He noted that while Cozumel has some berthing capacity in the summer, during the peak winter period it needed more to continue growing.

Attending the ceremony, veteran tour operator Trino Molina, md of Aviomar, called the Puerta Maya expansion 'fantastic for the island. It will bring more guests to Cozumel for years to come.'

It also underscores the trust Carnival has in Cozumel and in Mexico, Molina said.