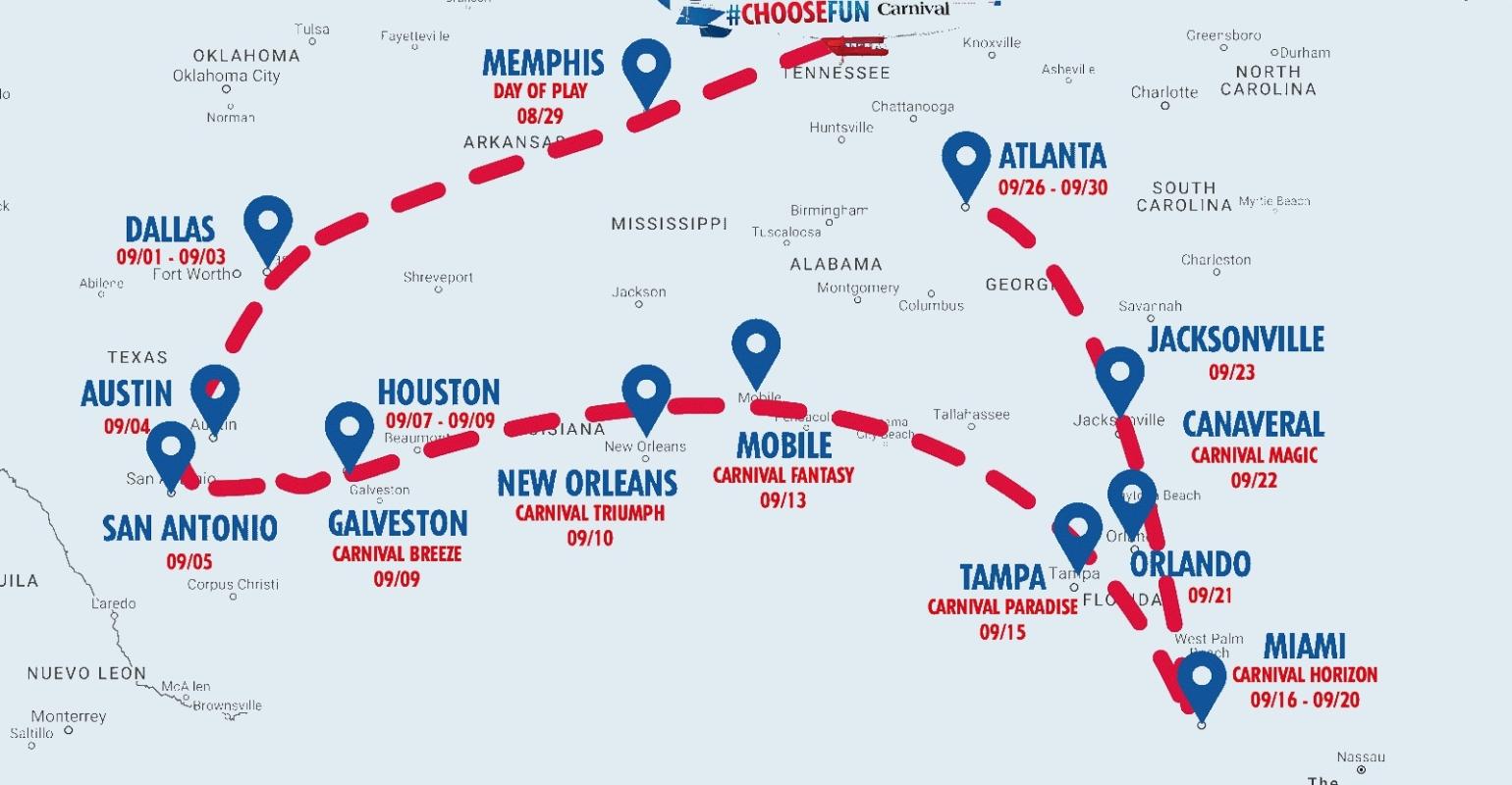 Chance to win a free cruise

Over the next 30 days, the AirShip will visit Houston, Dallas, Miami and Atlanta, with flyovers in 11 other cities. People who post pictures or videos of the blimp with hashtag #ChooseFun have a chance to win prizes, including a free cruise.

'We lovingly refer to these [deployment] moves as the Carnival ship shuffle. Working with the marketing team, our ad agency tried to come up with ideas to raise awareness. This really celebrates our new #ChooseFun marketing campaign,' Carnival president Christine Duffy told Seatrade Cruise News.

'It's a great way to encourage rookies to think about cruising and for people to understand we've got these ships right in their own backyard,' Duffy continued.

In addition to the Carnival AirShip's flights at homeports Galveston, Mobile, Tampa, Miami, Port Canaveral and Jacksonville, the blimp will appear over key source market cities like Dallas, Austin, San Antonio, Orlando and Atlanta, and at events such as football season openers.

The AirShip debuted today at Carnival’s Sixth Annual Day of Play at St. Jude Children’s Research Hospital in Memphis, with Duffy and all of Carnival's cruise directors gathered.

Besides the chance to win prizes, anyone who posts an AirShip photo on Facebook, Instagram or Twitter with #ChooseFun hashtag will also trigger a donation to St. Jude, Carnival’s longtime charitable partner.

Carnival has 18 year-round and seasonal North American homeports—more than any other line. Roughly half of the US population lives within a day’s drive of a Carnival homeport, providing convenience and affordability to vacationers.

'The message [of the homeport advantage promotion] is of Carnival ships being accessible to so many markets,' Duffy said.

Carnival Vista kicks off its new year-round deployment from the Port of Galveston on Sept. 23. The 2016-built ship will offer seven-day Caribbean cruises. On Sept. 30, Carnival Breeze begins seven- and 14-day itineraries from Port Canaveral.

Duffy will be flying aboard the Carnival AirShip for the first time in Atlanta. She's excited, but not daunted, about going up in the blimp.

'After doing my military service with the Department of Defense in June, I think this will be easy,' she said.