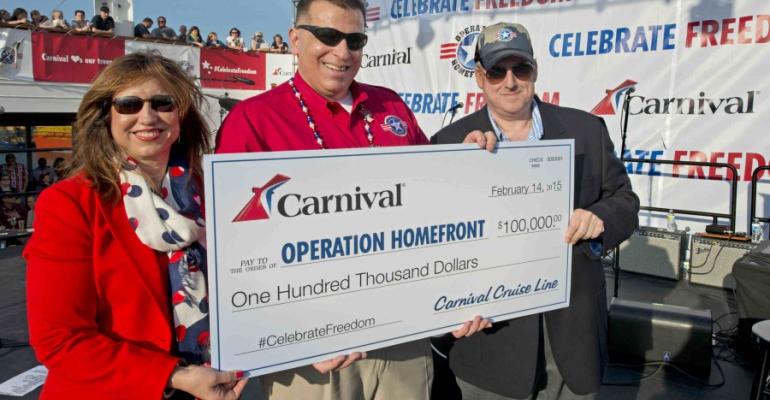 Carnival Cruise Line marked the arrival of Carnival Freedom at its new year-round homeport of Galveston on Saturday with a celebration honoring US military personnel and their families.

In partnership with Operation Homefront, a national nonprofit organization, service members and their families were treated to an overnight event including a performance by country music star Martina McBride. Dinner and a full evening of entertainment were also compliments of Carnival.

Prior to McBride’s concert Carnival presented a $100,000 donation to Operation Homefront.

'We’re excited to kick off Carnival Freedom’s year-round deployment from Galveston with a donation to an organization that touches so many lives and a special event for the brave men and women who serve our country,' Carnival president Christine Duffy said.

Carnival Freedom began year-round sailings from the Texas port Sunday with a special six-day voyage to Mexico. On Feb. 21, the ship will start four- to seven-day cruises calling at ports throughout Mexico, the Caribbean, Bahamas and Florida.

Carnival Freedom joins Carnival Triumph and Carnival Magic in Galveston. Together the three ships will carry more than 600,000 passengers annually from Texas—more than any other cruise line.

'Performing for these military families was an incredible honor. And everyone really enjoyed the outdoor setting on the ship’s deck,' McBride said.

Tim Farrell, chief operating officer for Operation Homefront, expressed appreciation to Carnival for hosting the military families and for the $100,000 donation.

Carnival Freedom recently underwent a $70m makeover that added Fun Ship 2.0 product enhancements, and attendees at Saturday’s event had full access to offerings like the new family entertainment programming including Seuss at Sea and Camp Ocean, with 200 marine-themed activities.