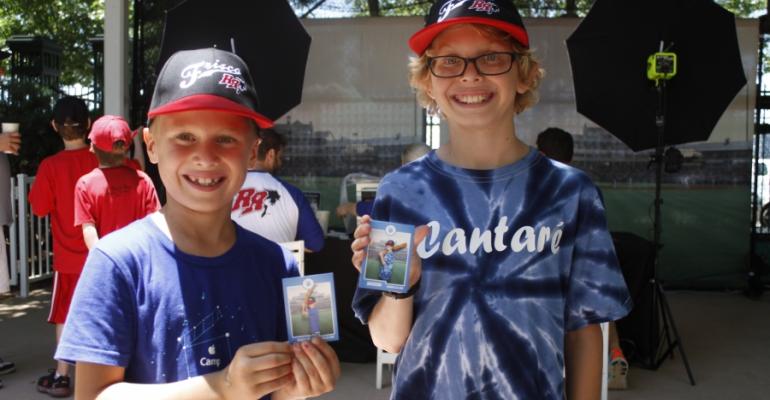 Young fans were photographed for a take-home baseball card

Carnival Cruise Lines and the Frisco RoughRiders, the Double-A affiliate of the Texas Rangers baseball team, hosted a day of fun, food and baseball for 500 children and their families. Sunday's event was at Dr Pepper Ballpark. The inaugural 'Carnival Kids Day' was part of the line’s multi-year marketing partnership with the ‘Riders.

During Sunday’s game between the RoughRiders and Midland RockHounds, part of an eight-game home stand, children and their families participated in activities and took photos with RoughRiders players. In addition, every participant received free game tickets and parking.

For this year’s Kids Day event, Carnival added experiences including an inflatable batter’s box and small ball toss, an airbrush face painting booth and art station where youngsters could create a souvenir drawstring backpack and a hula hoop activity and photo booth where fans could pose for a take-home baseball card.

'We’re thrilled to partner with the RoughRiders and give these deserving kids and families a memorable day at the ballpark filled with great activities, food and lots of smiles,' said Jim Berra, Carnival’s chief marketing officer.

As the official cruise line of the Frisco RoughRiders, Carnival is hosting a number of activities throughout the 2014 season. At each game, every time a RoughRiders player hits a home run, fans hear the sound of the Carnival ship horn, fireworks launch from the Carnival funnel in the outfield and celebratory graphics illuminate the stadium's LED signs. Carnival is also matching monetary donations made by fans during the Texas League tradition of 'Passing the Boot' for the RoughRiders Foundation, team and individual players after each RoughRiders' home run.

A new promotion that debuted over the weekend is the 'Carnival Crush Inning' when fans are randomly selected to win a free Carnival cruise for two and a $250 cash prize from the team, based on RoughRiders batting performance during that inning. The contestant will win a four-day cruise if a RoughRider gets a hit during the specified inning, and will be upgraded to a seven-day cruise if the home team hits a home run.

Fans can sign up for the promotion at the stadium or online before the game at RidersBaseball.com.

Carnival carries more cruisers from Texas than any other line.