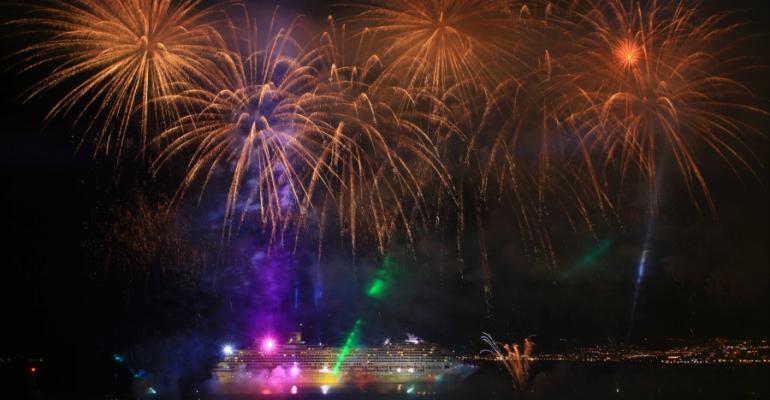 Costa Serena - to sail year-round from Shanghai starting in April 2015. The ship is pictured at its 2007 naming festivities in Marseille

Carnival Corp. & plc's answer to Quantum of the Seas in China comes in the form of a third year-round ship as Costa Serena heads to Shanghai in April 2015. The 114,500gt vessel joins Costa Victoria, Costa Atlantica and the seasonal Sapphire Princess to make Carnival Corp. the first global cruise operator with four vessels in China.

Carnival said it is capitalizing on growing demand that is expected to make China the second largest cruise market in the world by 2017—an astonishing development, if it happens.

Carnival claims an industry-leading cruise presence in China in 2014 and 2015. Costa Crociere's Costa Serena will join Costa Victoria and Costa Atlantica. Adding this third ship raises Carnival Corp.'s total 2014 capacity there by 66%. In addition, Princess Cruises' Sapphire Princess is due to begin a four-month season from Shanghai later this month. It will return to China in 2015.

Next year, with the four ships, the company's capacity will have jumped 140% in a two-year period.

'We have never been more committed to China as a market of great strategic importance for our company, and with today’s news we will be the only global cruise company to have four ships operating out of China,' said Arnold Donald, CEO of Carnival Corp. & plc. He added that Carnival's clout as the world's largest cruise company with 10 brands makes it 'very well-positioned to continue working with government officials in China to help the country meet its goal of becoming one of the most important cruise markets in the world.'

So Carnival's stated expectation that China could become the world's second largest cruise market in just three years would be a dramatic acceleration. A company spokesperson told Seatrade Insider Carnival was citing a Forbes Asia article. That said some 530,000 Chinese cruised beyond the mainland in 2013, more than double the previous year—which doesn't jive with ACA's count. The story said the Chinese government targets 4.5m Chinese cruisers by 2020.

Differing projections aside, there's no doubt China's cruise market will grow with the additional ships sailing in.

The 2007-built Costa Serena has capacity for 3,780 passengers. Varied five- and six-day cruises will visit destinations including Japan and Korea. 'Our guests will fall in love with this product,' said Costa's Buhdy Bok, svp Pacific Asia & China.

Carnival is investing significantly in Asia, and in China specifically. The company is concentrating on Japan, Singapore, Hong Kong, Taiwan and Korea. It's not been all smooth sailing.

Just last month, Princess said it would pull back to one ship in Japan during 2015, its third season there, but maintained that its enthusiasm for the Japan market hasn't diminished. Since Costa first began operating from China in 2006, it, too, has occasionally retrenched.

Carnival has 23 ships across seven brands—AIDA, Cunard, Holland America, P&O and Seabourn in addition to Costa and Princess—visiting 90 ports Asian ports with an estimated 1,439 port calls planned for 2014, including 220 calls across five brands in China. The company also has 10 sales offices across Asia, including five locations in China—Shanghai, Beijing, Tianjin, Guangzhou and Chengdu.

Royal Caribbean has offices in Shanghai, Beijing and Guangzhou, as well as in Singapore. Quantum of the Seas is to debut from Shanghai in June 2015 on year-round cruises to Japan and Korea. Itinerary details are to be announced.

Genting Hong Kong has commissioned a pair of 150,000gt newbuilds for Star Cruises that are due for delivery in October 2016 and October 2017. The first is expected to sail from Hong Kong.