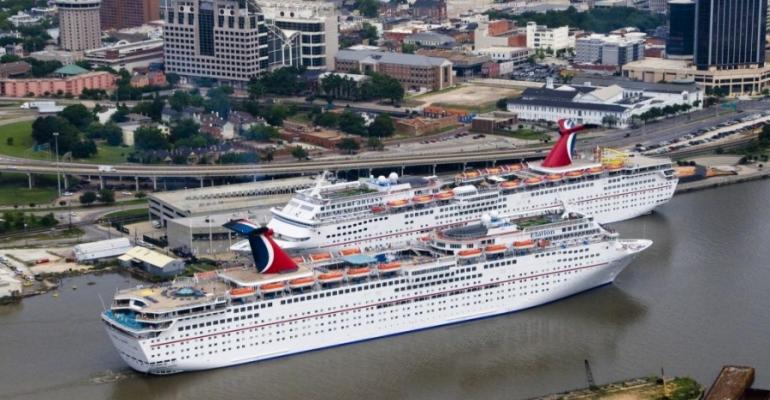 An agreement to deploy a Fun Ship in Mobile appears imminent. In this file photo, Carnival Elation passes Carnival Fantasy at the Alabama Cruise Terminal

Carnival Cruise Line confirmed it is in the final stages of contract negotiations to return to operating sailings from Mobile, Alabama. The company expects the process to be concluded by the end of September, a spokesman told Seatrade Cruise News, adding that Carnival wouldn't have more to say at this point.

Mayor Sandy Stimpson was in Miami on Wednesday to meet with Carnival.

The mayor's Facebook photo of himself in front of the Fun Ship funnel at Carnival headquarters set off speculation, and Stimpson told reporters on his return to Mobile that a contract would have to be approved by the city council and that is expected this month.

Carnival left Mobile in October 2011, after basing a ship in the city year-round since October 2004 when the Alabama Cruise Terminal opened.

Carnival first tested sailings from Mobile with the Holiday in 2002. The line's smallest ship was replaced with Elation in May 2010. Carnival pulled out in October 2011, citing the inability to raise fares for its Mobile program and rising fuel costs.

Mobile officials never gave up their quest to get Carnival to return. They employed a consultant to help with marketing, funded market research, promoted new attractions and continued to participate in industry events and cruise associations.

Roger Blum, a former long-time Carnival executive who is now the principal of Miami-based Cruise & Port Advisors, assisted Mobile in those efforts.

'When I worked with Mobile, we put tremendous efforts into explaining the excellent demographics of the potential drive market, as well as the great attractions available in the Mobile area. I was always confident that cruising would return to Mobile, and I'm thrilled for the Mobile community,' Blum said.

After Carnival Triumph lost power in the Gulf of Mexico in early 2013, the ship was towed to Mobile so passengers could disembark and repairs could be made. In July that year, the city stepped up again to take Carnival Conquest on short notice when the ship couldn't get back to its New Orleans homeport.

At 110,000gt, it was the biggest cruise vessel Mobile ever handled. A hundred buses were marshaled to transfer passengers and luggage, and Carnival officials praised the city for 'quickly and professionally mobilizing everything that was needed to make this turnaround a big success.'