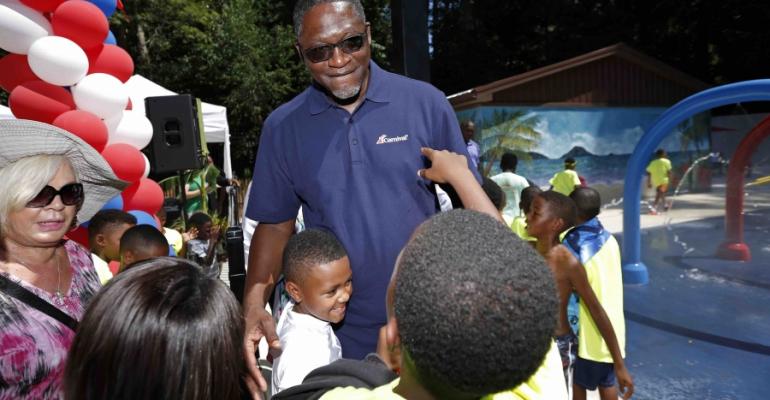 Carnival Cruise Line, community dignitaries and local families participated in the Tuesday opening of Splash Island at Atlanta’s historic Adams Park. The interactive red, white and blue-colored splash pad, funded in part by Carnival and inspired by the line's shipboard WaterWorks, is the latest addition to the park's pool area.

The day’s festivities included a ribbon-cutting and plaque unveiling presided over by the city of Atlanta in partnership with Carnival executives, former Hawks player and nine-time NBA All-Star Dominique Wilkins, Department of Parks and Recreation commissioner Amy Phuong and Atlanta Mayor Kasim Reed.

'Every year, we have the pleasure of welcoming thousands of Atlantans on board our fleet of cruise ships, so we want to bring a bit of our ships to the city, just in time for summer,' Carnival president Christine Duffy said.

Some of the new fixtures that now adorn Splash Island, including splash buckets and cannons, are a taste of the WaterWorks experience found on many Carnival ships.