Carnival Pride is 'back home' in Baltimore 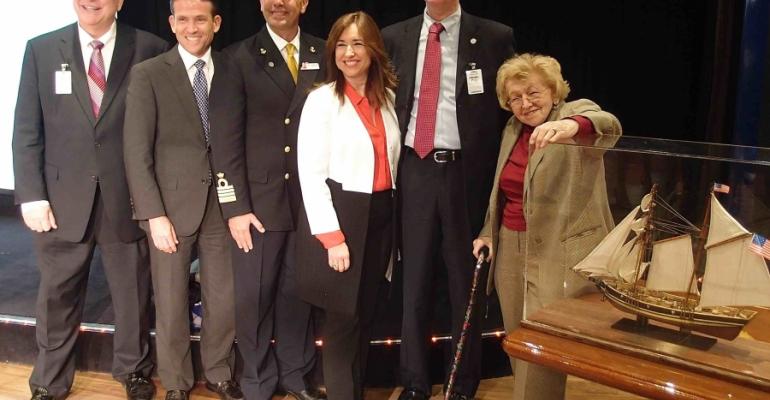 'We are very happy and pleased you've chosen us,' he told Carnival officials led by president Christine Duffy.

Rahn, Baltimore city council members, Maryland Port Administration leaders and Helen Delich Bentley herself were on hand for a reception, lunch and look at the Fun Ship 2.0 features added during a recent $75m drydock.

'We are happy to bring the Pride home,' Duffy told the officials and local media. She said the line expects to carry 120,000 passengers a year from Baltimore.

Duffy also asked the nearly 100 travel agents visiting for the day for their support. 'After this very long, cold winter, I think we're going to have a great selling season,' she said.

Carnival brand ambassador John Heald, who arrived with the ship on its repositioning cruise from Tampa, said the crew are excited to be back, and he thanked the city and port for taking care of 'the heartbeat of the ship.'

Capt. Francesco Borgogna told Seatrade Insider about Carnival Pride's 'amazing arrival,' with its scenic transit beneath the Key Bridge just before sunrise, where a fireboat spraying water greeted the ship. The captain asked a photographer to snap a picture of the dramatic moment for his wife and 8-year-old son back in Slovakia.

In 2013 when Carnival couldn't get enough advance notice on how US officials would interpret the new North American Emission Control Area regulations, the line reluctantly decided to leave Baltimore following its published sailings in 2014.

'Each ship generates about $1m for the economy and good paying jobs,' according to James White, executive director of the Maryland Port Administration. 'When we lost [Carnival Pride] to Tampa because of the [ECA uncertainty], we were devastated,' he said. 'Carnival was the first cruise line to homeport a ship here, so the pain was even worse. We worked really hard with Carnival to get the ship back.'

Transportation Secretary Rahn told Seatrade Insider that by sailing from Baltimore, 'the cruise lines get access to a great market,' adding: 'Baltimore is within driving distance of 40 million people and ships that leave here typically are fully booked.' The cruise terminal's location alongside a major interstate highway, I-95, and ample on-site parking make it especially convenient for the drive market.

They included scores of travel agents from Maryland, Pennsylvania, Virginia and the District of Columbia, invited by Carnival business development directors Kathy Donnelly, Grace Ambrosia and Christine Schutz. Donnelly said she would have additional agents on twice a month visits throughout the summer.

The cruise business is one that can grow in Baltimore, but a second facility would be needed, Maryland Port Administration chief White said. He cited a road study that found having two ships in port on the same day at the South Locust Point facility would cause congestion.

The port could develop another cruise berth at North Locust Point, however that could require a hefty $40m investment, including dredging. That project is not a priority, but one that will continue to be evaluated.

'We want to be smart about making these investments. We want to protect our existing business,' White said, adding that the Maryland Port Administration is more focused on continuing successful operations for the current homeporting ships from Carnival and Royal Caribbean, especially in winter.

It has been a process to educate the market about the opportunity to sail from Baltimore in the winter to warm-weather destinations.

'It's a great market,' White said. 'On-board spending is decent. There are a lot of affluent people in the area. We have a good mix of cruises.'

Carlos Torres de Navarra, vp commercial port operations for Carnival, said the line had done well in Baltimore since starting operations in 2009, 'and we wanted to come back.' He praised the support of the port, city and state, and said their appreciation for the business is clear.

'Carnival has been a major contributor to the Port of Baltimore and the state of Maryland over many years and they were very distressed when they were forced to pull out temporarily,' said Bentley, a former US congresswoman from Maryland and a champion of the port.

'So the fact they're back is like manna from heaven.'