Carnival’s Frank speaks from the heart about Concordia 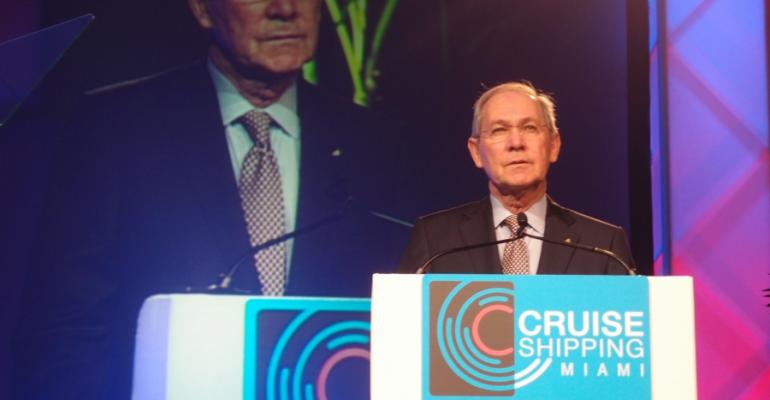 Frank - nothing more heart-wrenching than losing your passengers and crew

The deadly Costa Concordia capsize deeply affected Carnival Corp. & plc and the entire industry, said vice chairman Howard Frank, who delivered the Cruise Shipping Miami keynote address as chairman of Cruise Lines International Association. ‘As a shipowner, there is nothing more heart-wrenching than the loss of your passengers and crew members,’ Frank told the CSM audience in a voice sometimes cracking with emotion.

The industry has undertaken a ‘comprehensive, top to bottom review of safety,’ he said, adding that in past crises, cruising has shown ‘tremendous resiliency in bouncing back. We have every reason to look to the future with confidence.’

After first speaking as an industry leader, Frank—who traveled to Italy several times after the Concordia accident and met with families of the victims—then took a more intimate tone to underscore his support for Costa Crociere and admiration for Italy as a seafaring nation.

Since Concordia went down, Frank said he had worn only the Costa lapel pin to show his pride in the brand, adding that its employees had worked tirelessly since the accident and crew performed ‘heroically’ to evacuate the ship. He also made a strong salute to Italy, the country that has built most of the Carnival fleet and supplies many of the company’s seafarers.

‘Italy is one of the greatest seafaring nations in the world. Italian seafarers are among the best in the world. I feel I couldn’t be in better hands than when an Italian captain is on the bridge,’ Frank told the CSM audience.

‘Costa will come back strong than ever before,’ he predicted. ‘I will continue to wear my Costa pin and be proud of the Costa team and its Italian heritage.’